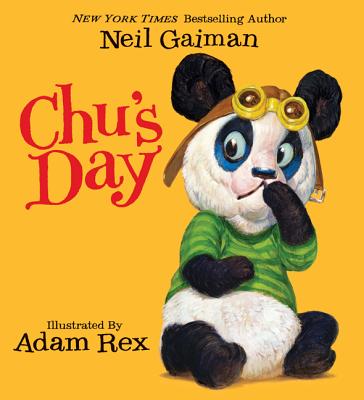 Chu is a little panda with a big sneeze. When Chu sneezes, bad things happen. But as Chu and his parents visit the library, the diner, and the circus, will anyone hear Chu when he starts to feel a familiar tickle in his nose?

Chu's Day is a story that reflects upon how young children aren't always listened to…sometimes to calamitous effect.

Neil Gaiman is a #1 New York Times bestselling author of books for children and adults whose award-winning titles include Norse Mythology, American Gods, The Graveyard Book, Good Omens (with Terry Pratchett), Coraline, and The Sandman graphic novels. Neil Gaiman is a Goodwill Ambassador for UNHCR and Professor in the Arts at Bard College.

Adam Rex is the author of many books, including Cold Cereal and Unlucky Charms, the first two books in the Cold Cereal Saga; the New York Times bestselling picture books The Legend of Rock Paper Scissors and Frankenstein Makes a Sandwich; the middle grade novel The True Meaning of Smekday (now a major motion picture from Dreamworks, Home); and the teen novel Fat Vampire. He lives in Arizona with his wife.

“Kids will find the idea of a monstrous sneeze funny, and it may prompt some attempts of their own. Rex’s richly detailed illustrations are brimming with fantastic touches. Share this one at toddler storytime for lots of giggles, or one-on-one for spotting details in the art.”
— Booklist

“Gaiman’s comic timing gets a boost from strategic book design and from Rex’s hyperreal paintings, which emphasize Chu’s round, fuzzy form and apparent harmlessness. Gaiman and Rex deliver a classic one-two-three punch, making hay from the notion that a cuddly baby panda is not to be trusted.”
— Publishers Weekly (starred review)
Like us on Facebook
Follow us on Twitter
Follow us on Instagram