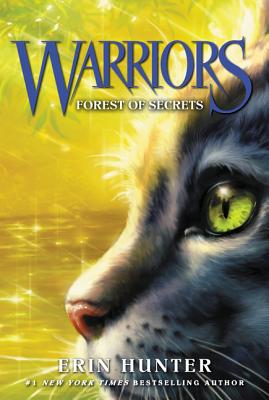 Join the legion of fans who have made Erin Hunter’s Warriors series a bestselling phenomenon. More thrilling adventures, epic action, and fierce warrior cats await in Warriors #3: Forest of Secrets.

Allegiances are shifting among the Clans of warrior cats that roam the forest. With tensions so delicately balanced, friends can become enemies overnight, and some cats are willing to kill to get what they want.

Fireheart is determined to find out the truth about the mysterious death of the former ThunderClan deputy Redtail. But as he searches for answers, he uncovers secrets that might be better left hidden….

Erin Hunter is inspired by a love of cats and a fascination with the ferocity of the natural world. In addition to having great respect for nature in all its forms, Erin enjoys creating rich mythical explanations for animal behavior. She is also the author of the Seekers, Survivors, Bravelands, and Bamboo Kingdom series.

“This exciting book is not for the faint of heart. Fans of the series will lap it up while impatiently awaiting the next entry.” — School Library Journal

“Hunter moves forward with a sure hand in the third installment of this fast-moving series. The story is suspenseful; the feline characters are engaging.” — Voice of Youth Advocates (VOYA)