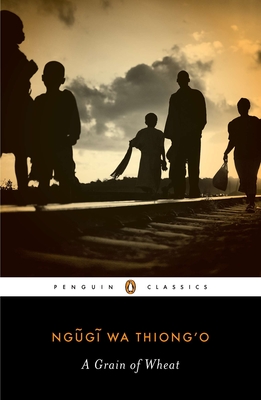 This is book number 2 in the Penguin African Writers Series series.

Barack Obama, via Facebook: “A compelling story of how the transformative events of history weigh on individual lives and relationships.”

Set in the wake of the Mau Mau rebellion and on the cusp of Kenya's independence from Britain, A Grain of Wheat follows a group of villagers whose lives have been transformed by the 1952–1960 Emergency. At the center of it all is the reticent Mugo, the village's chosen hero and a man haunted by a terrible secret. As we learn of the villagers' tangled histories in a narrative interwoven with myth and peppered with allusions to real-life leaders, including Jomo Kenyatta, a masterly story unfolds in which compromises are forced, friendships are betrayed, and loves are tested.

Ngugi wa Thiong'o is an award-winning novelist, playwright, and essayist from Kenya whose novels have been translated into more than thirty languages. He lives in Irvine, California, where he is Distinguished Professor of English and Comparative Literature at the University of California, Irvine.

Abdulrazak Gurnah won the Nobel Prize in Literature, in 2021, and is the author of the Booker Prize–shortlisted novel Paradise, among other novels. He was born in Zanzibar, Tanzania, and teaches English literature at the University of Kent in England.