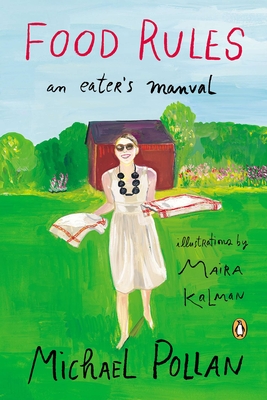 Michael Pollan’s Food Rules prompted a national discussion helping to change the way Americans approach eating. This new edition illustrated by celebrated artist Maira Kalman—and expanded with a new introduction and nineteen additional food rules—marks an advance in the national dialogue that Food Rules inspired. Many of the new rules, suggested by readers, underscore the central teachings of the original Food Rules, which are that eating doesn’t have to be so complicated and that food is as much about pleasure and community as it is about nutrition and health. A beautiful book to cherish and share, Food Rules guides us with humor, joy, and common sense toward a happier, healthier relationship to food.
Michael Pollan is the author of eight books, including How to Change Your Mind, Cooked, Food Rules, In Defense of Food, The Omnivore’s Dilemma, and The Botany of Desire, all of which were New York Times bestsellers. He is also the author of the audiobook Caffeine: How Coffee and Tea Made the Modern World. A longtime contributor to The New York Times Magazine, Pollan teaches writing at Harvard University and the University of California, Berkeley. In 2010, Time magazine named him one of the one hundred most influential people in the world.

Maira Kalman is an illustrator, author, and designer. She is the author of And the Pursuit of Happiness and The Principles of Uncertainty, and she illustrated the bestselling edition of William Strunk and E.B. White's The Elements of Style. Kalman's work is shown at the Julie Saul Gallery in Manhattan.
"In the more than four decades that I have been reading and writing about the findings of nutritional science, I have come across nothing more intelligent, sensible and simple to follow than the 64 principles outlined in a slender, easy-to-digest new book called Food Rules: An Eater’s Manual, by Michael Pollan." — Jane Brody, The New York Times

"The most sensible diet plan ever? We think it's the one that Michael Pollan outlined a few years ago: “Eat food. Not too much. Mostly plants.” So we're happy that in his little new book, Food Rules, Pollan offers more common-sense rules for eating: 64 of them, in fact, all thought-provoking and some laugh-out-loud funny." —The Houston Chronicle

" It doesn't get much easier than this. Each page has a simple rule, sometimes with a short explanation, sometimes without, that promotes Pollan's back-to-the-basics-of-food (and-food-enjoyment) philosophy." —The Los Angeles Times

"A useful and funny purse-sized manual that could easily replace all the diet books on your bookshelf." —Tara Parker-Pope, The New York Times