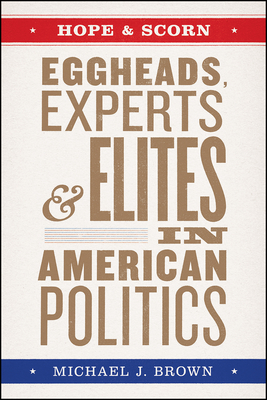 Intellectuals “have been both rallying points and railed against in American politics, vessels of hope and targets of scorn,” writes Michael J. Brown as he invigorates a recurrent debate in American life: Are intellectual public figures essential voices of knowledge and wisdom, or out-of-touch elites? Hope and Scorn investigates the role of high-profile experts and thinkers in American life and their ever-fluctuating relationship with the political and public spheres.

From Eisenhower’s era to Obama’s, the intellectual’s role in modern democracy has been up for debate. What makes an intellectual, and who can claim that privileged title? What are intellectuals’ obligations to society, and how, if at all, are their contributions compatible with democracy? For some, intellectuals were models of civic engagement. For others, the rise of the intellectual signaled the fall of the citizen. Carrying us through six key moments in this debate, Brown expertly untangles the shifting anxieties and aspirations for democracy in America in the second half of the twentieth century and beyond. Hope and Scorn begins with “egghead” politicians like Adlai Stevenson; profiles scholars like Richard Hofstadter and scholars-turned-politicians like H. Stuart Hughes; and ends with the rise of public intellectuals such as bell hooks and Cornel West. In clear and unburdened prose, Brown explicates issues of power, authority, political backlash, and more. Hope and Scorn is an essential guide to American concerns about intellectuals, their myriad shortcomings, and their formidable abilities.

Michael J. Brown is assistant professor of history at the Rochester Institute of Technology.

"A brilliant and wise book. . .  [Brown's] treatment of my calling and work is the best I know of. . . Magisterial."
— Cornel West, Harvard University

“This book will change the terms in which historians have thought about the meaning of intellectual life in the second half of the twentieth century. . . . Hope and Scorn gives us a perspective on intellectuals and democratic values that has been sorely lacking. It is bracing to have a thoughtful and careful analysis of the recent history of the meaning of intellectual authority for the dream of a democratic society.”
— Daniel Wickberg, University of Texas, Dallas

“Brown’s superb study offers illuminating and challenging new insights on an ever-present tension in American thought and politics: the role of the professional intellectual in American political life. Deeply researched and beautifully crafted, Hope and Scorn explores the diverse and contested roles intellectuals played in American political commentary and participation, while also shedding light on their internal struggles as they navigated the inherent values of the life of the mind and the obligations of democratic commitment. Hope and Scorn will quickly establish Brown as an exciting new voice in American intellectual and political history.”
— Jennifer Ratner-Rosenhagen, author of The Ideas That Made America

“Donald Trump has thrust the important intellectual history that Hope and Scorn deals with into the very center of American politics and culture. Brown offers a thoughtful and engaging critical account of possible inspirations for overcoming the hostility to eggheads and experts that causes so much cultural turmoil and damage today. Hope and Scorn demands your attention. It is essential reading for those thinking about how intellectuals can contribute to a democracy under siege.”
— Neil McLaughlin, McMaster University

“In vivid and astute analyses of how particular influential intellectuals from the 1950s to the end of the century grappled with their tortured roles as politically concerned intellectuals, Brown proves how important the intellectual’s role qua intellectual became during this half century. Hope and Scorn adds an important dimension to our understanding of the intense intellectual and political conflicts of the period.”
— Dorothy Ross, Johns Hopkins University

"Focusing on major American public thinkers and writers of the half-century after 1945, this searching book lucidly explores the 'tension between intellectuals’ special claims to authority and democratic principles.' . . . This knowledgeable historical study adds significantly to an already large library of books about American thought in the second half of the 20th century. An impressively authoritative and readable first book by a promising historian."