The Disappearing Spoon: And Other True Tales of Rivalry, Adventure, and the History of the World from the Periodic Table of the Elements (Young Readers Edition) (Paperback) 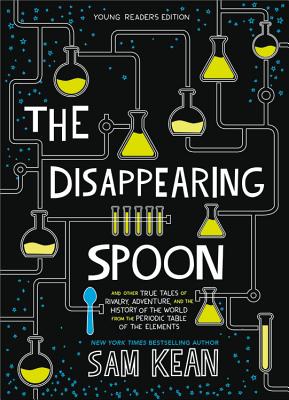 The Disappearing Spoon: And Other True Tales of Rivalry, Adventure, and the History of the World from the Periodic Table of the Elements (Young Readers Edition) (Paperback)


On Our Shelves Now
A young readers edition of the New York Times bestseller The Disappearing Spoon, chronicling the extraordinary stories behind one of the greatest scientific tools in existence: the periodic table.

Why did Gandhi hate iodine (I, 53)? How did radium (Ra, 88) nearly ruin Marie Curie's reputation? And why did tellurium (Te, 52) lead to the most bizarre gold rush in history?

The periodic table is a crowning scientific achievement, but it's also a treasure trove of adventure, greed, betrayal, and obsession. The fascinating tales in The Disappearing Spoon follow elements on the table as they play out their parts in human history, finance, mythology, conflict, the arts, medicine, and the lives of the (frequently) mad scientists who discovered them.

Adapted for a middle grade audience, the young readers edition of The Disappearing Spoon offers the material in a simple, easy-to-follow format, with approximately 20 line drawings and sidebars throughout. Students, teachers, and burgeoning science buffs will love learning about the history behind the chemistry.
Sam Kean is the author of the New York Times bestsellers The Disappearing Spoon and The Violinist's Thumb andThe Tale of the Dueling Neurosurgeons. His work has appeared in The New York Times Magazine, Mental Floss, Slate, and New Scientist, and has been featured on NPR's "Radiolab" and "All Things Considered."