Queen of the Hanukkah Dosas (Hardcover) 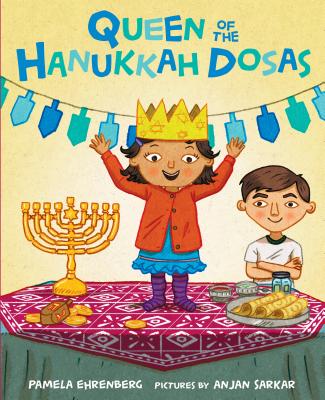 Queen of the Hanukkah Dosas (Hardcover)

Instead of latkes, this family celebrates Hanukkah with tasty Indian dosas. To her brother's chagrin, little Sadie won't stop climbing on everything both at home and at the Indian grocery store, even while preparing the dosas. As the family puts the finishing touches on their holiday preparations, they accidentally get locked out of the house. Sadie and her climbing skills just may be exactly what is needed to save the day.

In addition to Queen of the Hanukkah Dosas, Pamela Ehrenberg is the author of the young readers novels Ethan, Suspended and Tillmon County Fire. She now lives in Washington, DC, where she works at the National Association for the Education of Young Children and lives with her daughter and son near the National Zoo.

Anjan Sarkar was born in the UK and his heritage is mixed British and Indian. Anjan has created work for children’s books, animation, and advertising. Anjan works from a little studio in his home in Sheffield, England. He lives with his wife and two young children. Anjan is the illustrator of Pamela Ehrenberg's Queen of the Hanukkah Dosas.

"The illustrations are bright and cheerful with endpapers that are a mouthwatering display of ingredients for Indian food. A delightful culinary adventure celebrates traditional Indian food as part of a Jewish holiday." —Kirkus

"...there’s something comforting about the steady step-by-step trajectory of the text and Sarkar’s stylish cartooning. Readers will also appreciate how the narrator turns a customized version of “I Have a Little Dreidel” (“I have a little dosa...”) into a sister-wrangling tool." —Publishers Weekly