A Life of My Own: A Memoir (Paperback) 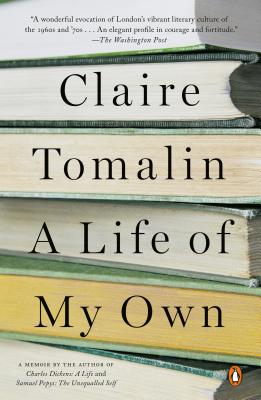 A Life of My Own: A Memoir (Paperback)

“[An] intelligent and humane book…There is genuine appeal in watching this indomitable woman continue to chase the next draft of herself." —Dwight Garner, The New York Times

In A Life of My Own, the renowned biographer of Charles Dickens, Samuel Pepys, and Thomas Hardy, and former literary editor for the Sunday Times reflects on a remarkable life surrounded by writers and books. From discovering books as a form of escapism during her parents' difficult divorce, to pursuing poetry at Cambridge, where she meets and marries Nicholas Tomalin, the ambitious and striving journalist, Tomalin always steered herself towards a passionate involvement with art. She relives the glittering London literary scene of the 1960s, during which Tomalin endured her husband's constant philandering and numerous affairs, and revisits the satisfaction of being commissioned to write her first book, a biography of the early feminist Mary Wollstonecraft. In biography, she found her vocation. However, when Nick is killed in 1973 while reporting in Israel, the mother of four put aside her writing to assume the position of literary editor of the New Statesman. Her career soared when she later moved to the Sunday Times, and she tells with dazzling candor of this time in her life spent working alongside the literary lights of 1970s London. But, the pain of her young daughter's suicide and the challenges of caring for her disabled son as a single mother test Claire's strength and persistence. It is not until later in life that she is able to return to what gave her such purpose decades ago, writing biographies, and finds enduring love with her now-husband, playwright Michael Frayn.

Marked by honesty, humility, and grace, rendered in the most elegant of prose, A Life of My Own is a portrait of a life, replete with joy and heartbreak. With quiet insight and unsparing clarity, Tomalin writes autobiography at its most luminous, delivering an astonishing and emotionally-taut masterpiece.
Claire Tomalin is the author of eight highly acclaimed biographies, including Thomas Hardy and Samuel Pepys: The Unequalled Self, which won the 2002 Whitbread Book of the Year Award. She has previously won the James Tait Black Memorial Prize for Biography, the Whitbread First Novel Award, the Hawthornden Prize, the NCR Book Award for Non-Fiction, and the Whitbread Biography Award. Educated at Cambridge University, she served as literary editor of the New Statesman and the Sunday Times (London). Claire Tomalin lives in London and is married to the playwright Michael Frayn.
“[An] intelligent and humane book…There is genuine appeal in watching this indomitable woman continue to chase the next draft of herself. After a while, the pages turn themselves. Tomalin has a biographer’s gift for carefully husbanding her resources, of consistently playing out just enough string. When she needs to, she pulls that string tight.” —Dwight Garner, The New York Times

“Tomalin brings to her memoir a pro’s practiced ability at threading the personal, the professional and the contextual with details that sing… [She offers] a wonderful evocation of London’s vibrant literary culture of the 1960s and ’70s…An elegant profile in courage and fortitude.” —Washington Post

“[A LIFE OF MY OWN] navigates artfully between tantalizing revelations and unobtrusive elisions. I read the memoir twice in an effort to deconstruct how Ms. Tomalin does it, leading us into her nooks and crannies and then firmly closing the curtain at some point, but literary ingenuity of this caliber is always hard to pin down…The pleasures of reading this book are many…I hesitate to call this book enchanting because Ms. Tomalin’s life is strewn with tragedy…but it is certainly an exceptional account, daunting and inspiring at the same time, written with no end of poignancy, humor and perspective.” —Wall Street Journal

“In this memoir as in her acclaimed biographies, Tomalin lets the telling of a story reveal its own truth, unmarked by the moralizing of the soapbox. And what a story it is.” —Christian Science Monitor

“[Tomalin] is a master craftswoman, and it’s a thrill to see her prose and capacity for moving storytelling turned on her own life… If it leads you to read some of her biographies (Jane Austen is a favorite), you’ll be better off.”—Vogue.com

“An arresting look at a professional life inextricably entwined with the lifelong personal concerns of a woman who is also a wife, daughter, and mother…A quiet book, beautifully told with both restraint and generosity of spirit.” —BookPage

“An extraordinarily candid autobiography…This is an elegant, significant book.”—Kirkus Reviews

“[A] captivating and thorough memoir. Tomalin sets out to describe her “experience of the world”…a gracious, inspiring look at her family, colleagues, and friends.”—Publishers Weekly (starred review)