How I Got My Shrunken Head (Classic Goosebumps #10) (Paperback) 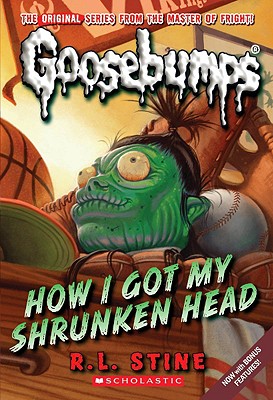 How I Got My Shrunken Head (Classic Goosebumps #10) (Paperback)

This is book number 10 in the Classic Goosebumps series.

Discover the bone-chilling adventures that made Goosebumps one of the bestselling children's book series of all time. Now with all-new bonus materials!What has two eyes, a mouth, and wrinkly green skin? Mark's shrunken head! It's a present from his Aunt Benna. A gift from the jungle island of Baladora.And Mark can't wait to show the kids at school!But late one night the head starts to glow. Because it's actually no ordinary head. It gives Mark a strange power. A magical power. A dangerous power...Now with all-new bonuses including an author interview, gross-out facts, and more!
R.L. Stine is the creator of the bestselling Goosebumps series, which has more than 400 million copies in print worldwide and celebrated 25 years in 2017. Goosebumps is one of the bestselling children's series of all-time and inspired a popular television show, as well as a feature film starring Jack Black that opened at #1 at the box office. His other popular children's books include the series Fear Street, Mostly Ghostly, The Nightmare Room, and Rotten School, and his first picture book, with Marc Brown, The Little Shop of Monsters. R.L. Stine lives in New York City. You can connect with him on Twitter at @RL_Stine or Facebook: facebook.com/rlstine. For more information, visit rlstine.com and www.scholastic.com/goosebumps.