Be Careful What You Wish For (Classic Goosebumps #7) (Paperback) 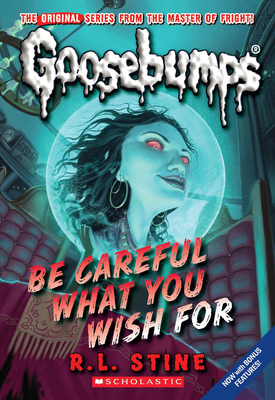 Be Careful What You Wish For (Classic Goosebumps #7) (Paperback)

This is book number 7 in the Classic Goosebumps series.

Discover the bone-chilling adventures that made Goosebumps one of the bestselling children's book series of all time. Now with all-new bonus materials!Samantha Byrd is a klutz. An accident waiting to happen. And that makes her the least popular member of the girls' basketball team.But all of that is about to change. Sam's met someone who can grant her three wishes.Too bad Sam wasn't more careful when she asked for. BEcause her wishes are coming true. And they're turning her life into a living nightmare!Now with all-new bonus materials including an author interview and more!
R.L. Stine is the creator of the bestselling Goosebumps series, which has more than 400 million copies in print worldwide and celebrated 25 years in 2017. Goosebumps is one of the bestselling children's series of all-time and inspired a popular television show, as well as a feature film starring Jack Black that opened at #1 at the box office. His other popular children's books include the series Fear Street, Mostly Ghostly, The Nightmare Room, and Rotten School, and his first picture book, with Marc Brown, The Little Shop of Monsters. R.L. Stine lives in New York City. You can connect with him on Twitter at @RL_Stine or Facebook: facebook.com/rlstine. For more information, visit rlstine.com and www.scholastic.com/goosebumps.