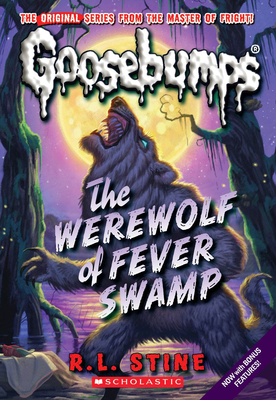 This is book number 11 in the Classic Goosebumps series.

Who's afraid of the big, bad wolf? A new package for a best-selling Classic Goosebumps! Now with bonus features!There is something weird happening in Fever Swamp. Something really horrible.It started with the strange howling at night. Then there was the rabbit, torn to shreds. Everyone thinks Grady's new dog is responsible. After all, he looks just like a wolf. And he seems a little on the wild side.But Grady knows his dog is just a regular old dog. And most dogs don't howl at the moon. Or disappear at midnight. Or change into terrifying creatures when the moon is full.Or do they?
R.L. Stine is the creator of the bestselling Goosebumps series, which has more than 400 million copies in print worldwide and celebrated 25 years in 2017. Goosebumps is one of the bestselling children's series of all-time and inspired a popular television show, as well as a feature film starring Jack Black that opened at #1 at the box office. His other popular children's books include the series Fear Street, Mostly Ghostly, The Nightmare Room, and Rotten School, and his first picture book, with Marc Brown, The Little Shop of Monsters. R.L. Stine lives in New York City. You can connect with him on Twitter at @RL_Stine or Facebook: facebook.com/rlstine. For more information, visit rlstine.com and www.scholastic.com/goosebumps.