Stay Out of the Basement (Classic Goosebumps #22) (Paperback) 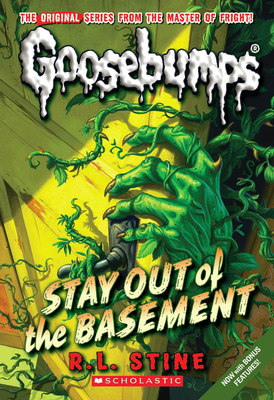 Stay Out of the Basement (Classic Goosebumps #22) (Paperback)

This is book number 22 in the Classic Goosebumps series.

Get Goosebumps with the startling repackage of a best selling classic. Now with bonus materials!Dr. Brewer is doing a little plant-testing in his basement. Nothing to worry about. Harmless, really. But Margaret and Casey Brewer are worried about their father. Especially when they...meet...some of the plants he is growing down there. Then they notice that their father is developing plantlike tendencies. In fact, he is becoming distinctly weedy-and seedy. Is it just part of their father's "harmless" experiment? Or has the basement turned into another little shop of horrors?
R.L. Stine is the creator of the bestselling Goosebumps series, which has more than 400 million copies in print worldwide and celebrated 25 years in 2017. Goosebumps is one of the bestselling children's series of all-time and inspired a popular television show, as well as a feature film starring Jack Black that opened at #1 at the box office. His other popular children's books include the series Fear Street, Mostly Ghostly, The Nightmare Room, and Rotten School, and his first picture book, with Marc Brown, The Little Shop of Monsters. R.L. Stine lives in New York City. You can connect with him on Twitter at @RL_Stine or Facebook: facebook.com/rlstine. For more information, visit rlstine.com and www.scholastic.com/goosebumps.