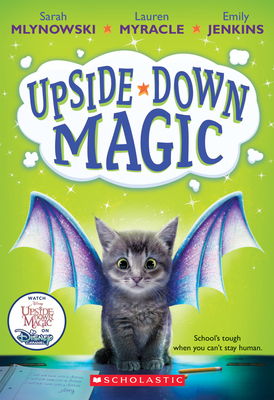 This is book number 1 in the Upside-Down Magic series.

— From Tatum's Totes
Meet the Upside-Down Magic kids in the first topsy-turvy adventure of this New York Times bestselling series, now a Disney Channel Original Movie!It's never easy when your magic goes wonky.For Nory, this means that instead of being able to turn into a dragon or a kitten, she turns into both of them at the same time -- a dritten.For Elliott, the simple act of conjuring fire from his fingertips turns into a fully frozen failure.For Andres, wonky magic means he's always floating in the air, bouncing off the walls, or sitting on the ceiling.For Bax, a bad moment of magic will turn him into a . . . actually, he'd rather not talk about that.Nory, Elliott, Andres, and Bax are just four of the students in Dunwiddle Magic School's Upside-Down Magic class. In their classroom, lessons are unconventional, students are unpredictable, and magic has a tendency to turn wonky at the worst possible moments. Because it's always amazing, the trouble a little wonky magic can cause . . .
Lauren Myracle is the New York Times bestselling author of many books for young readers, including The Winnie Years (which begins with Ten), the Flower Power series (which begins with Luv Ya Bunches), and the Life of Ty series. She would like to be a Fuzzy so she could talk to unicorns and feed them berries. You can find Lauren online at laurenmyracle.com.
Sarah Mlynowski is the New York Times bestselling author of the Whatever After series, the Magic in Manhattan series, Best Wishes, Gimme a Call, and a bunch of other books for teens and tweens, including the Upside-Down Magic series, which she cowrites with Lauren Myracle and Emily Jenkins and which was adapted into a movie for the Disney Channel. Originally from Montreal, Sarah now lives in Los Angeles with her family. Visit Sarah online at sarahm.com and find her on Instagram, Facebook, and Twitter at @sarahmlynowski.
Emily Jenkins is the author of many chapter books, including the Toys trilogy (which begins with Toys Go Out) and the Invisible Inkling series. Her picture books include Lemonade in Winter, Toys Meet Snow, and The Fun Book of Scary Stuff. She would like to be a Flare and work as a pastry chef. Visit Emily at emilyjenkins.com.