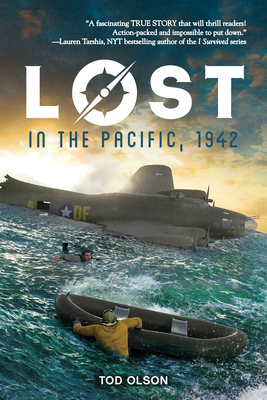 
On Our Shelves Now
LOST IN THE PACIFIC is the first book in a new narrative nonfiction series that tells the true story of a band of World War II soldiers who became stranded at sea and had to fight for survival.World War II, October 21, 1942. A B-17 bomber drones high over the Pacific Ocean, sending a desperate SOS into the air. The crew is carrying America's greatest living war hero on a secret mission deep into the battle zone. But the plane is lost, burning through its final gallons of fuel.At 1:30 p.m., there is only one choice left: an emergency landing at sea. If the crew survives the impact, they will be left stranded without food or water hundreds of miles from civilization. Eight men. Three inflatable rafts. Sixty-eight million square miles of ocean. What will it take to make it back alive?
Tod Olson is the author of the Lost series, the How to Get Rich historical fiction series, and numerous books for the school/library and classroom markets. He has written for national magazines on the Columbine school shooting, homeless teens, the murder of Matthew Shepard, and many other stories of interest to children and young adults. During his 25 years in children's publishing, he has edited and developed several collections of books for both school/library and the classroom. Tod holds an MFA from Vermont College.
Praise for Lost in the Pacific, 1942: Not a Drop to Drink * "A riveting, completely engrossing true survival story. " -- Kirkus Reviews, starred review

Praise for Lost in the Pacific, 1942: Not a Drop to Drink * "A riveting, completely engrossing true survival story. " -- Kirkus Reviews, starred review