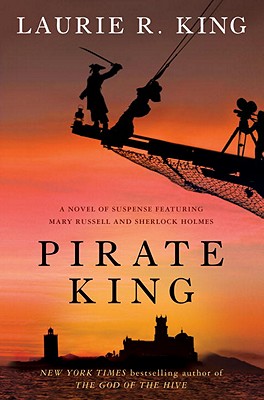 In this latest adventure featuring the intrepid Mary Russell and her husband, Sherlock Holmes, New York Times bestselling author Laurie R. King takes readers into the frenetic world of silent films—where the pirates are real and the shooting isn’t all done with cameras.

In England’s young silent-film industry, the megalomaniacal Randolph Fflytte is king. Nevertheless, at the request of Scotland Yard, Mary Russell is dispatched to investigate rumors of criminal activities that swirl around Fflytte’s popular movie studio. So Russell is traveling undercover to Portugal, along with the film crew that is gearing up to shoot a cinematic extravaganza, Pirate King. Based on Gilbert and Sullivan’s The Pirates of Penzance, the project will either set the standard for moviemaking for a generation . . . or sink a boatload of careers.

Nothing seems amiss until the enormous company starts rehearsals in Lisbon, where the thirteen blond-haired, blue-eyed actresses whom Mary is bemusedly chaperoning meet the swarm of real buccaneers Fflytte has recruited to provide authenticity. But when the crew embarks for Morocco and the actual filming, Russell feels a building storm of trouble: a derelict boat, a film crew with secrets, ominous currents between the pirates, decks awash with budding romance—and now the pirates are ignoring Fflytte and answering only to their dangerous outlaw leader. Plus, there’s a spy on board. Where can Sherlock Holmes be? As movie make-believe becomes true terror, Russell and Holmes themselves may experience a final fadeout.

Laurie R. King is the "New York Times" bestselling author of eleven Mary Russell mysteries, five contemporary novels featuring Kate Martinelli, and the acclaimed novels "A Darker Place, Folly, Keeping Watch, "and "Touchstone." She lives in Northern California, where she is currently at work on her next novel.

“Brilliant and beautifully complex….Her descriptions of locales are voluptuous, and her continued delineation of the relationship of Russell and Holmes exquisitely portrays the eroticism of intellectual give-and-take.”  —Booklist (starred review)

“The Mary Russell series is the most sustained feat of imagination in mystery fiction today.”—Lee Child

“The great marvel of King’s series is that she’s managed to preserve the integrity of Holmes’s character and yet somehow conjure up a woman astute, edgy, and compelling enough to be the partner of his mind as well as his heart.” —The Washington Post Book World

The award-winning novels of Laurie R. King are . . .

“A lively adventure in the very best of intellectual company.”—The New York Times

“Erudite, fascinating . . . by all odds the most successful re-creation of the famous inhabitant of 221B Baker Street ever attempted.”—Houston Chronicle