We Are a Garden: A Story of How Diversity Took Root in America (Hardcover) 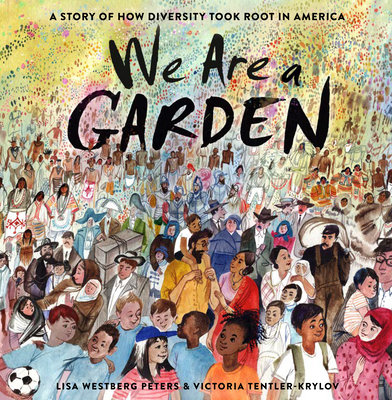 We Are a Garden: A Story of How Diversity Took Root in America (Hardcover)


On Our Shelves Now
This lyrical and extremely timely picture book illuminates the many different migrants who have made their homes in North America through the centuries.

Long ago a strong wind blew. It blew people, like seeds, to a new land.

The wind blew in a girl and her clan, where herds of mammoths still wandered the frozen tundra. It later blew a boy and his family across frigid waters, and they spread across the new land. Over time, the wind continued to disperse newcomers from all directions. It blew in men who hoped to find gold, and slave ships, and immigrant families. And so it continued, for generations and generations. Here is a moving and tender picture book that beautifully examines centuries of North American history and its people.
Lisa Westberg Peters is the author of nineteen children's books including Our Family Tree: An Evolution Story, the winner of the Minnesota Book Award. Her first book, The Sun, The Wind and the Rain, was named an Outstanding Science Trade Book, and many of her titles have received starred reviews. She lives in Minneapolis with her husband, but they spend much of their time at their cabin in northwestern Wisconsin. Visit her at lisawestbergpeters.com.

Victoria Tentler-Krylov grew up in Saint Petersburg, Russia, and studied architecture and urban design at Cooper Union and Columbia University. Victoria's artwork has been published by Pink Giraffe Books in Russia and by Spider magazine, The Wall Street Journal, The Boston Globe, and Flutter Magazine in the US. She is the illustrator of Just Read! by Lori Degman. Her first book, a picture-book read-aloud of Peter Pan, was published by Quarto. She lives with her family just outside Boston, MA. Visit Victoria online at cargocollective.com/victoriakrylov.
"Enlightening, visually gorgeous, and emotionally moving." --Kirkus Reviews, starred review