A Boy Named Isamu: A Story of Isamu Noguchi (Hardcover) 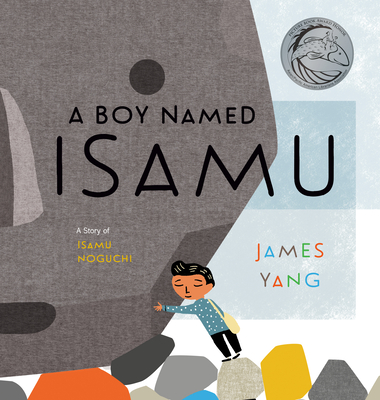 A Boy Named Isamu: A Story of Isamu Noguchi (Hardcover)


Will Ship in 1-5 Days from our Distributor
Awarded an Asian/Pacific American Award for Literature Picture Book Honor, this stunning picture book brings to life the imagination of Japanese American artist, Isamu Noguchi.

If you are Isamu, stones are the most special of all.
How can they be so heavy?
Would they float if they had no weight?

Winner of the Theordor Seuss Geisel Award in 2020 for Stop! Bot!, James Yang imagines a day in the boyhood of Japanese American artist, Isamu Noguchi. Wandering through an outdoor market, through the forest, and then by the ocean, Isamu sees things through the eyes of a young artist . . .but also in a way that many children will relate. Stones look like birds. And birds look like stones.

Through colorful artwork and exquisite text, Yang translates the essence of Noguchi so that we can all begin to see as an artist sees.
James Yang's prize-winning work has appeared in many magazines and newspapers, including Graphis, Newsweek, Forbes, Fortune, the New York Times, and the Wall Street Journal. He is the author/illustrator of Stop! Bot!, Bus! Stop!, Joey and Jet, Joey and Jet in Space, and Puzzlehead. The designer of "Clockman," a sculpture on display at the National Museum of American History, Mr. Yang and his wife live in New York City.
★ “A marvel of prose, illustration, and design that invites repeated meditation.” — Kirkus (starred review)

★ “Yang (Stop! Bot!, 2019) renders this imagined biography of Japanese American Isamu Noguchi with the utmost tenderness… This lyrical biography will resonate with creative types of all ages and can easily be incorporated into a curriculum as a springboard for writing, research, and art projects.” — Booklist (starred review)

★ “Yang's lyrical writing and rich vocabulary reads well aloud while providing thoughts to further ponder and discuss, especially for readers in today's busy, noisy world. Though produced in picture book format, the concepts—the need for quiet, introspection, and beauty in nature—will resonate across many grade levels. This is a book for all ages.”
— School Library Connection (starred review)

★ “Yang’s text meets child readers on their own level, framing the natural world as a source of curiosity and delight. His digital illustrations feel warm and organic…The book works as both an introduction to a fascinating artist and a tribute to the quiet joys of the natural world.” — The Horn Book (starred review)