Killers of the Flower Moon: Adapted for Young Readers: The Osage Murders and the Birth of the FBI (Paperback) 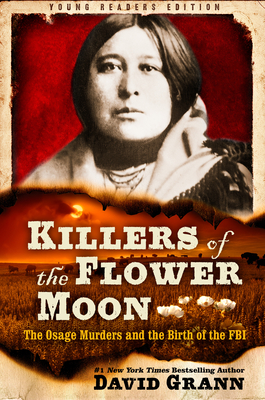 Killers of the Flower Moon: Adapted for Young Readers: The Osage Murders and the Birth of the FBI (Paperback)


On Our Shelves Now
The New York Times bestseller and National Book Award finalist about one of history's most ruthless and shocking crimes--the Reign of Terror against the Osage people--has now been adapted for young readers.

In the 1920s, the richest people per capita in the world were members of the Osage Nation in Oklahoma, thanks to the oil that was discovered beneath their land. Then, one by one, the Osage began to die under mysterious circumstances, and anyone who tried to investigate met the same end.

As the death toll surpassed more than twenty-four Osage, the newly created F.B.I. took up the case, in what became one of the organization's first major homicide investigations. An undercover team, including one of the only Native American agents in the bureau, infiltrated the region, struggling to adopt the latest modern techniques of detection to bring an end to the deadly crime spree. Together with the Osage they began to expose one of the most chilling conspiracies in American history.

In this youngification of the adult bestseller, David Grann revisits the gripping investigation into the shocking crimes against the Osage people. It is a searing indictment of the callousness and prejudice toward Native Americans that allowed the murderers to continue for so long and provides essential information for young readers about a shameful period in our history.
David Grann is a staff writer at The New Yorker and the best-selling author of The Lost City of Z, which was chosen as one of the best books of the year by The New York Times, The Washington Post, and other publications and has been translated into more than twenty-five languages. He is also the author of The Devil and Sherlock Holmes and The Killers of the Flower Moon. His work has garnered several honors for outstanding journalism, including a George Polk Award.
"An eye-opening, challenging, and thoroughly sourced saga that will open the door to many necessary conversations." -Booklist, starred review

"A young readers treatment that is just as imperative and enthralling as its parent text."--School Library Journal, starred review

"There is no shortage of jaw-dropping information in Killers of the Flower Moon. Grann entices younger readers with a mystery worthy of fiction and grips them with a thriller."--Shelf Awareness, starred review

"This compelling page-turner highlights criminal exploitation of Osage people and the work of the modern FBI." -Kirkus Reviews