His Name Is George Floyd: One Man's Life and the Struggle for Racial Justice (Hardcover) 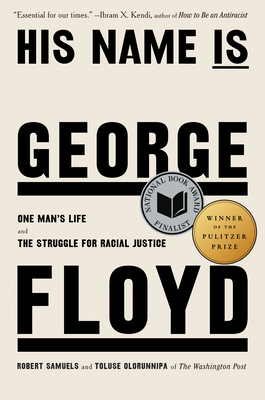 His Name Is George Floyd: One Man's Life and the Struggle for Racial Justice (Hardcover)

A landmark biography by two prizewinning Washington Post reporters that reveals how systemic racism shaped George Floyd's life and legacy—from his family’s roots in the tobacco fields of North Carolina, to ongoing inequality in housing, education, health care, criminal justice, and policing—telling the story of how one man’s tragic experience brought about a global movement for change.

“It is a testament to the power of His Name Is George Floyd that the book’s most vital moments come not after Floyd’s death, but in its intimate, unvarnished and scrupulous account of his life . . . Impressive.”
—New York Times Book Review

“A much-needed portrait of the life, times, and martyrdom of George Floyd, a chronicle of the racial awakening sparked by his brutal and untimely death, and an essential work of history I hope everyone will read.”
—Henry Louis Gates, Jr., author of The Black Church: This Is Our Story, This Is Our Song

The events of that day are now tragically familiar: on May 25, 2020, George Floyd became the latest Black person to die at the hands of the police, murdered outside of a Minneapolis convenience store by white officer Derek Chauvin. The video recording of his death set off the largest protest movement in the history of the United States, awakening millions to the pervasiveness of racial injustice. But long before his face was painted onto countless murals and his name became synonymous with civil rights, Floyd was a father, partner, athlete, and friend who constantly strove for a better life.

His Name Is George Floyd tells the story of a beloved figure from Houston's housing projects as he faced the stifling systemic pressures that come with being a Black man in America. Placing his narrative within the context of the country's enduring legacy of institutional racism, this deeply reported account examines Floyd's family roots in slavery and sharecropping, the segregation of his schools, the overpolicing of his community amid a wave of mass incarceration, and the callous disregard toward his struggle with addiction—putting today's inequality into uniquely human terms. Drawing upon hundreds of interviews with Floyd's closest friends and family, his elementary school teachers and varsity coaches, civil rights icons, and those in the highest seats of political power, Washington Post reporters Robert Samuels and Toluse Olorunnipa offer a poignant and moving exploration of George Floyd’s America, revealing how a man who simply wanted to breathe ended up touching the world.
Robert Samuels is a national political enterprise reporter for The Washington Post who focuses on the intersection of politics, policy, and people. He previously wrote stories about life in the District for the Post’s social issues team. Samuels joined the Post in 2011 after spending nearly five years working at the Miami Herald.

Toluse Olorunnipa is the White House Bureau Chief for The Washington Post. He joined the Post in 2019 and has covered three presidencies. He previously worked at Bloomberg, where he reported on politics and policy from Washington and Florida.
“It is a testament to the power of His Name Is George Floyd that the book’s most vital moments come not after Floyd’s death, but in its intimate, unvarnished and scrupulous account of his life . . . a brilliantly revealing portrait of the structures of poverty, land theft and racism that shaped not only Floyd but also his kinship networks in the South. . . . Impressive.”
—The New York Times Book Review, Editors' Choice

“[T]he definitive work on who Floyd was and what his murder triggered. Gripping, heartbreaking, revelatory.”
—Oprah Daily

“[A]n expertly researched and excellent biography, a necessary and enlightening read for all.”
—The Atlantic

“A full, nuanced picture of the man whose murder sparked a movement.”
—People

“His Name Is George Floyd reaches way beyond the familiar narrative to consider the world of George Floyd, his country, his history, and the politics and policies that shaped his family—and the family of his murder, Derek Chauvin. It’s a feat of fresh reporting, and vivid, contextual contemporary history.”
—Chicago Tribune

“This deeply reported biography reaches into history to help us understand how the forces of racism shaped every aspect of Floyd’s life, up to his tragic death.”
—NPR, Books We Love

“Sometimes a single book can change a national discussion, and certainly this is one. With diligence, respect, unflinching courage, His Name Is George Floyd affords tender, trenchant testimony to a man’s life and the lessons in the legacies of racism that took it.”
—Barnes & Noble, Best Books of the Year

“This is a profound book that everyone in this country needs to read.”
—Amy Goodman, Democracy Now!

“Impeccably researched . . . Interwoven with the biographical details are incisive sketches of the political and historical events that have shaped life for Floyd’s family and other Black Americans. This multifaceted and exceptionally informative account is both a moving testament to Floyd and a devastating indictment of America’s racial inequities.”
—Publishers Weekly, starred review, Best Books 2022

“Writing with cogency and compassion, the authors free Floyd from the realm of iconography, restoring his humanity . . . A brilliant biography, history book, and searing indictment of this country’s ongoing failure to eradicate systemic racism.”
—Kirkus Reviews, starred review, Best of 2022

“This gripping oral history offers a behind-the-scenes look at the man, his loved ones and community, and the aftermath of his horrific death . . . A wrenching chronicle of one of the most devastating events of our time . . . vital and illuminating.”
—Booklist, starred review, Editors’ Choice

“A healing book about a truly terrible moment . . . this social biography of George Floyd is a masterwork.”
—The Progressive

“Excellent, important . . . Samuels and Olorunnipa’s achievement is to bring to life the flesh-and-blood man behind the stereotype and statistics.”
—TLS

“A much-needed portrait of the life, times, and martyrdom of George Floyd, a chronicle of the racial awakening sparked by his brutal and untimely death, and an essential work of history I hope everyone will read.”
—Henry Louis Gates, Jr., author of The Black Church: This Is Our Story, This Is Our Song

“A vivid, necessary portrait of a Black man in America, in all its nuance, tragedy, and fullness. In his death, George Floyd’s name became a rallying cry for the entire world. And this extraordinary book brings to life, with thoroughly reported detail, the indispensable context of systemic racism in which he lived.”
—Abby Phillip, CNN anchor and senior political correspondent

“In the years that have passed since his dying declaration—I can't breathe—we have come to know George Floyd as a symbol but have known little of George Floyd the man. In a monumental work of reporting and storytelling, Robert Samuels and Toluse Olorunnipa reveal who George Floyd was in life, and the extent to which his death was the result not just of the callous choices of a single police officer but of four hundred years of societal decisions to devalue Black life. Amid a raging pandemic and urgent questions about our democracy, there has been little time to mourn George Floyd. The pages of this book provide us all with that that long-overdue opportunity.”
—Wesley Lowery, Pulitzer Prize–winning reporter and author of They Can't Kill Us All: The Story of the Struggle for Black Lives

“His Name Is George Floyd is part eulogy, part elegy, and part psalm. It dares to reclaim the humanity of George Floyd while simultaneously forcing the reader to confront a truth saturated with sorrow and with elements of hope that many in the nation refuse to accept. If we as a nation refuse to ‘say his name’ and face this tragic moment, we shall condemn our democracy to the lower circle of Dante’s Inferno. Let us ‘say his name’ and thoughtfully read and be moved by this powerful work of journalism and prose.”
—Reverend Otis Moss III

“This book is a wondrous feat of vivid writing and deep reporting, from the way it leads the reader through George Floyd's final fateful day on earth to its masterly account of Floyd’s hopes and frustrations in the larger context of race in America.”
—David Maraniss, Pulitzer Prize–winning reporter and author of Barack Obama: The Story

“His Name Is George Floyd is a sobering, deeply intimate account of George Floyd’s life and all that he had to carry and contend with as a Black man coming of age in America. In a remarkable feat of reporting, Robert Samuels and Toluse Olorunnipa help us come to know Floyd as a full, rich, complicated human being, whose murder and whose journey in life forces us to reckon with the unquestionable truth that race still very much matters in this country. Thank you Samuels and Olorunnipa for taking us behind the headlines.”
—Alex Kotlowitz, author of There Are No Children Here: The Story of Two Boys Growing Up in the Other America