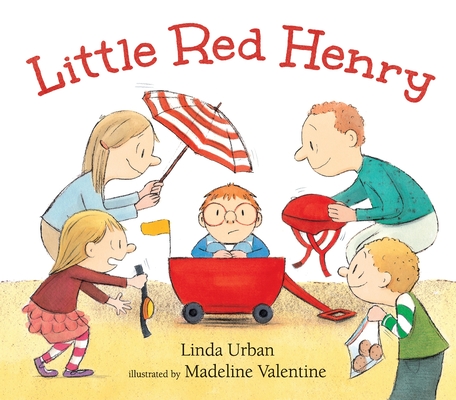 
On Our Shelves Now
Well, there’s overprotective—and then there’s Little Red Henry’s family! A hilarious tale about what happens when a coddled kid asserts his independence.

Little redheaded Henry’s family treats him like a baby. They dress him. They feed him. They brush his “widdle toofers.” But he’s not a baby anymore. He’s a little boy who wants to do things for himself. So with his family watching anxiously from the wings, Henry sets out on a glorious day of independence. But will things swing too far in the other direction? In this charming reworking of the classic tale of the Little Red Hen, author Linda Urban and illustrator Madeline Valentine gently and humorously depict a family trying to find a middle ground between hovering over their youngest member and giving him room to grow.
Linda Urban is the author of the picture book Mouse Was Mad, an International Reading Association Children's Choice, and the middle-grade novels A Crooked Kind of Perfect, Hound Dog True, and The Center of Everything. A former bookseller, she lives in Vermont with her family.

Madeline Valentine is the author-illustrator of The Bad Birthday Idea. Painting and drawing have been her favorite activities since she was smaller than Little Red Henry. She lives in Brooklyn, New York.
This is a book that seems lighthearted, but it has a clear — and incredibly refreshing — agenda, offering parents a path to recovery from the current insanity. Valentine’s witty watercolors and gouache present a kind of anthology of the current vogue for extreme parenting, adding fantastic details to the already humorous story.
—The New York Times

Valentine’s (George in the Dark) cleverly composed cartooning slyly portrays how a skewed domestic dynamic rights itself.... From start to finish, it’s an irresistible story for the target audience: Henry’s assertiveness results in an epic play date, as Urban’s (Mouse Was Mad) terrific text elaborates (“They teeter-totted and monkey-barred and triumphed gloriously on the battlefield”), and his family is still at his beck and call at bedtime. Who says you can’t have it all?
—Publishers Weekly (starred review)

Striking a balance between lively and atmospheric, Valentine's illustrations lend a depth to the lighthearted story of cosseted Henry's insistence on independence.... Urban's narrative tone matches the illustrative tone in its sophistication. Relatively complicated sentence structures are combined with simple ones, and the result is an energetic text. A story that humorously but gently reminds overprotective families that it is natural and necessary and healthy for a child to learn to do for himself.
—Kirkus Reviews

This charming story will resonate with children beginning to assert their independence.
—School Library Journal