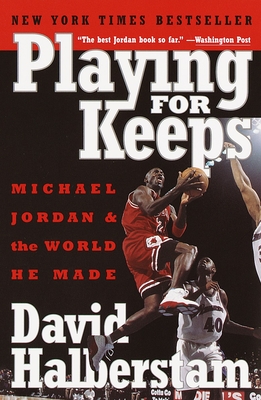 By David Halberstam
$18.00
On Our Shelves Now

NEW YORK TIMES BESTSELLER • From a Pulitzer Prize–winning journalist comes “the best Jordan book so far” (The Washington Post), the story of Michael Jordan’s legendary years with the Chicago Bulls, capped by the 1998 NBA Finals and the team’s second three-peat.

From The Breaks of the Game to Summer of ’49, David Halberstam has brought the perspective of a great historian, the insider knowledge of a dogged sportswriter, and the love of a fan to bear on some of the most mythic players and teams in the annals of American sports. With Michael Jordan and the Chicago Bulls he has given himself the greatest challenge and produced his greatest triumph.

In Playing for Keeps, Halberstam takes the first full measure of Michael Jordan’s epic career, one of the great American stories of our time. A narrative of astonishing power and human drama, brimming with revealing anecdotes and penetrating insights, the book chronicles the forces in Jordan’s life that have shaped him in to history’s greatest basketball player and the larger forces that have converged to make him the most famous living human being in the world.

David Halberstam is the author of fifteen books, including The Best and the Brightest, The Powers That Be, The Reckoning, The Breaks of the Game, Summer of '49, October 1964, and The Amateurs. He has received every major journalistic award, including the Pulitzer Prize, and is a member of the Society of American Historians.

“A remarkable book . . . a must-read for basketball fans, admirers of Jordan, and anyone who seeks to understand sports in America today.” —Bill Bradley

“What David Halberstam delivers--and what the reader has come to expect from Halberstam—is insight, balance, analysis.”—The New York Times

“A wonderful book, written by a remarkable journalist.”—Seattle Times