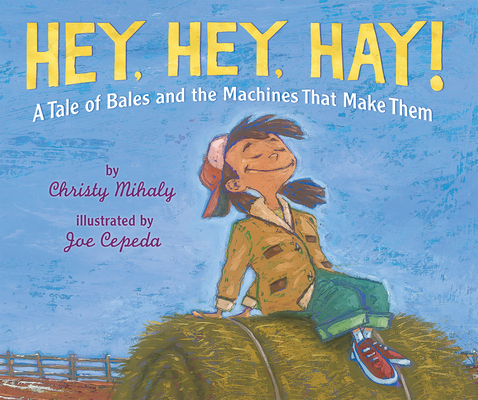 
On Our Shelves Now
Every bale of hay has a little bit of summer sun stored in the heart of it— learn from a mother-daughter team how hay is made!

Feeding her horses one cold and wintry day, a girl thinks about all the hard work that went into the fresh-smelling bales she's using. The rhyming text and brilliant full-page paintings follow the girl and her mother through the summer as they cut, spread, dry and bale in the fields.

Mower blades slice through the grass./A new row falls with every pass./Next we spread the grass to dry./The tedder makes those grasses fly!

This celebration of summer, farming, and family, illustrated by Pura Belpré honor artist Joe Cepeda, includes a glossary of haymaking words, and a recipe for making your own switchel— a traditional farm drink, to cool you down in the summer heat.

A Bank Street Best Children's Book of the Year
CHRISTY MIHALY writes articles, stories, essays, and poems for children. Her juvenile nonfiction books have been published by Focus, Rosen, and National Geographic Kids.

JOE CEPEDA, recipient of a Pura Belpré honor, has illustrated many books for young people including ¡Vámonos! Let's Go! by RENE COLATO LAINEZ and Swing Sisters: The Story of the International Sweethearts of Rhythm by KAREN DEANS. He both wrote and illustrated the I Like to Read® title Up.
"A rhyming tale of hay, from field to bale.  In a twist on traditional work roles, this mother-daughter team tackles the job of harvesting hay. . . . Debut picture-book author Mihaly shares the true secret of hay bales—a tiny bit of summer is trapped inside each one, ready to burst out when opened on a winter’s day. Snappy, economic rhymes capture the entire process of a far-from-oft-told farm chore, while Cepeda’s oil-over-acrylic medium heightens the muddied, earthy environment. Mother and daughter are depicted with olive skin and straight, dark-brown hair.  Even urban readers will cheer; in fact, the title commands it."—Kirkus Reviews

"Mihaly has penned an ode to the summertime harvest of hay in this terse picture book. The author energetically portrays the rural tradition of baling hay with bouncing verse and rhyming phrases. . . . Framed by seasons and organized by the types of machinery used, this tale explains the hay-baling process from start to finish. Cepeda’s warm paintings convey the experience of this element of agricultural life with the palate and tone of a waning summer. . . . A simple lyrical picture book celebrating one aspect of agricultural communities."—School Library Journal

"This nostalgic, rhyming ode to baling hay is narrated by a girl whose broad grin makes clear her love for farm life. . . Cepeda uses thick painterly layers to capture the beauty and brilliance of summer fields and changing skies."—Publishers Weekly