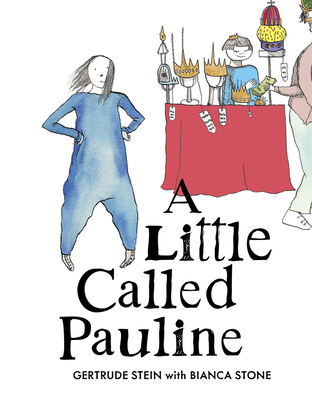 Pauline lives with her mom in a house on stilts by the sea. A Little Called Pauline is the first picture book adaptation of a poem from Gertrude Stein's groundbreaking 1914 book Tender Buttons.

Featuring vibrant illustrations from poet-artist Bianca Stone, A Little Called Pauline invites young readers to experience Stein's playful, mysterious language for the very first time and to delight in the adventures of a girl named Pauline. According to Stone's afterword, "Pauline likes to do things her mom does, like type on a typewriter, and she doesn't like to wear dresses. She also really, really wants to get a fancy crown at the market on her birthday, but they don't have enough money...and Pauline throws a bit of a tantrum. Later, while her mom has a grownup birthday party for her, she runs away and jumps into a little boat. She rows out to sea. And all her family friends are searching for her. She sees all kinds of beautiful sights on her boat, but then things go terribly wrong, and Pauline needs to be rescued. In the end she is so glad for what she has, more than any crown to put on her head. Because she has a whole group of friends and family who love her--especially her mom.

Gertrude Stein was a poet, novelist, playwright, and art collector born in Allegheny, Pennsylvania, on February 3, 1874. She grew up in Oakland, California, and moved to Paris in 1903, where she lived with her life partner, Alice B. Toklas, until she died in 1946. Known for her experimental language play, Stein published her famous Tender Buttons in 1914, the collection of prose poems "A Little Called Pauline" comes from. She loved to host gatherings of writers at her home in Paris, including Ernest Hemingway, Sherwood Anderson, and Ezra Pound. She published one picture book in 1939 called The World is Round, illustrated by Clement Hurd.Bianca Stone is a poet and visual artist. She is the author of Someone Else's Wedding Vows (Tin House & Octopus Books, 2014), Poetry Comics From the Book of Hours, (Pleiades, 2016), and The Mobius Strip Club of Grief (Tin House, 2018). She collaborated with Anne Carson on Antigonick, a book pairing Carson's translation of Antigone with Stone's illustration and comics (New Directions, 2012). Her poems and artwork have appeared in such magazines as the New Yorker, jubilat and Poetry. She is Director of Programs at the Ruth Stone House in Goshen, Vermont.
Like us on Facebook
Follow us on Twitter
Follow us on Instagram