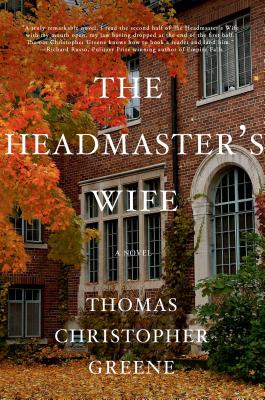 An immensely talented writer whose work has been described as "incandescent" (Kirkus) and "poetic" (Booklist), Thomas Christopher Greene pens a haunting and deeply affecting portrait of one couple at their best and worst.

Inspired by a personal loss, Greene explores the way that tragedy and time assail one man's memories of his life and loves. Like his father before him, Arthur Winthrop is the Headmaster of Vermont's elite Lancaster School. It is the place he feels has given him his life, but is also the site of his undoing as events spiral out of his control. Found wandering naked in Central Park, he begins to tell his story to the police, but his memories collide into one another, and the true nature of things, a narrative of love, of marriage, of family and of a tragedy Arthur does not know how to address emerges. Luminous and atmospheric, bringing to life the tight-knit enclave of a quintessential New England boarding school, the novel is part mystery, part love story and an exploration of the ties of place and family. Beautifully written and compulsively readable, The Headmaster's Wife stands as a moving elegy to the power of love as an antidote to grief.

"A truly remarkable novel, I read the second half of The Headmaster's Wife with my mouth open, my jaw having dropped at the end of the first half. Thomas Christopher Greene knows how to hook a reader and land him." --Richard Russo, Pulitzer Prize winning author of Empire Falls

"An accomplished and artful storyteller, Greene has surprises in store as he unspools a plot that becomes as poignant as it is unpredictable." --Wally Lamb, New York Times bestselling author of The Hour I First Believed

THOMAS CHRISTOPHER GREENE is the author of Mirror Lake, I'll Never be Long Gone, and Envious Moon. His fiction has been translated into eleven languages and has won many awards and honors. In 2007, Tom founded the Vermont College of Fine Arts, a top fine arts college, making him the youngest college president in America at that time. He lives in Montpelier, VT, with his family.

“A tightly woven, atmospheric thriller about a New England academic whose life goes off the rails.” —People

“Part of a grand literary tradition… But literary overtones notwithstanding, Greene's plot has the tight, relentless pacing of a fine detective novel… Deeply felt… and utterly absorbing.” —Washington Post

“The Headmaster's Wife had me hooked from page one… [it] kept me compulsively turning pages, attempting (and failing) to guess what would happen next… The Headmaster's Wife explores how we create various versions of ourselves based on situations, needs, and instincts. Sometimes, shedding a figurative skin and inhabiting a new one is the only way to move forward in a world where so much is outside of our control. While that's something I hope most readers relate to in theory more than experience, this wise, tender, and gracefully executed literary thriller will no doubt bewitch you too.” —Redbook

“Thomas Christopher Greene's haunting tale tracks the unraveling of a marriage. It starts, eerily, with a naked man's arrest in New York City's Central Park, then twists back in time through love, grief, betrayal, and love again.” —Good Housekeeping

“A layered story of love, unbearable loss and grief.” —Fort Worth Star-Telegram

“Greene's deft and nimble hand make the story itself a guiltless pleasure to read.” —Denver Post

“What seems to be a deceptively simple story about the headmaster of a New England boarding school and his wife, facing late middle age and growing apart over a difference of opinion about their teenage son, morphed into a haunting, mysterious page-turner… A meditation on longing in all of life's stages, a literary mystery, and a novel with much for book clubs to untangle.” —Concord Monitor

“Nothing is what it appears in this brilliant story of a life gone awry... The author's true intentions make this tale even more remarkable, for the book is, at its core, a trenchant examination of one family's terrible loss and how the aftermath of tragedy can make or break a person's soul.” —Publishers Weekly

“Greene has created a brilliant, harrowing novel depicting the spectacular unraveling of a once distinguished and proudly successful man. He has also conceived one of the most convincingly drawn unreliable narrators that readers may ever meet, a character recalling the creations of Edgar Allan Poe… This is a riveting psychological novel about loss and the terrible mistakes and compromises one can make in love and marriage. Essential for fans of literary fiction.” —Library Journal, starred review

“A moving testament to the vicissitudes of love and loss, regret and hope.” —Kirkus

“A truly remarkable novel, I read the second half of The Headmaster's Wife with my mouth open, my jaw having dropped at the end of the first half. Thomas Christopher Greene knows how to hook a reader and land him.” —Richard Russo, Pulitzer Prize winning author of Empire Falls

“An accomplished and artful storyteller, Greene has surprises in store as he unspools a plot that becomes as poignant as it is unpredictable.” —Wally Lamb, New York Times bestselling author of The Hour I First Believed

“Incredibly beautiful and compulsively readable, The Headmaster's Wife will keep you mesmerized into the wee hours. A master storyteller, Greene's biggest achievement is proving that the most complex mystery of all is how and why we love.” —Kimberly McCreight, New York Times bestselling author of Reconstructing Amelia

“I devoured this book. It has all the hooks – a mystery, a marriage, an investigation, a loss, a close-up of a society I'm not privy to – and yet, at its heart, there are unexpected love stories embedded within. Thomas Christopher Greene is a wonderfully accomplished novelist, and The Headmaster's Wife is both psychologically complex and wickedly fast-paced.” —Julianna Baggott, New York Times bestselling author of Pure

“Greene has a carefully-calibrated story to tell in this side-winding novel, and he tells it with consummate skill.” —Open Letters Monthly

“A mesmerizing tale… of tragedy, family and a tight-knit society built on secrets.” —DuJour magazine

“Thomas Christopher Greene explores the effects a tragic loss has on self and family…. A difficult yet gripping read, I found it very hard to put this book down.” —BookLoons.com

“A beautifully written look into a man's soul and how he copes with an increasingly cold marriage, a life-changing event, and the almost inevitable loss of the small, safe world he's hidden in. A strong contender for my favorite 2014 novel (even this early in the year).” —bethfishreads.com

“A beautifully written exploration of love, of family, and how the loss of someone so dear to you can send your entire world, your very being, into a downward, out of control, spiral… This novel will, without a doubt, top my list of favorites of 2014. It will leave you speechless, stunned by how expertly this author has captured tragedy and the loss. Greene knows loss, it serves as his inspiration for writing this novel. To learn more, please check out the video embedded below.” —jennsbookshelves.com

“What is left to know (without giving anything away) is that Greene uses memory in a way so quiet and subtle it feels like walking on quicksand. The truth is somewhere but who has it? Mystery and suspense can be abused in the wrong hands but Greene plays with the psychology behind the story so deftly there is no feeling of suspending belief or being toyed with, instead, there is love, tenderness, and the sad truth of what the mind does to ensure survival. The Headmaster's Wife is a painfully beautiful look at where our decisions and expectations take us. And, more importantly… where they leave us.” —gilmoreguidetobooks.com

“While the story is totally different, there is a likeness to A Beautiful Mind that teases at your senses… The twists are amazing and the ending is unexpected. If you enjoy novels that make you think and those that take you into the unimaginable, you will find this to be a terrific find. There is mystery and romance, as well as friendships and hidden agendas.

This would be a terrific book for both a reading group and a book club, with a wealth of information to utilize to keep the discussion lively” —seattlepi.com

“Smart, moving, funny, deeply felt and told, The Headmaster's Wife is one of the best books I've read so far this year.” —ChaoticCompendiums.com

“This is a well-written book for grown-ups. Fast (be prepared to stay up all night reading it, you won't want to stop) and cinematic in its scene set-ups and intensity.” —HereWeAreGoing.wordpress.com