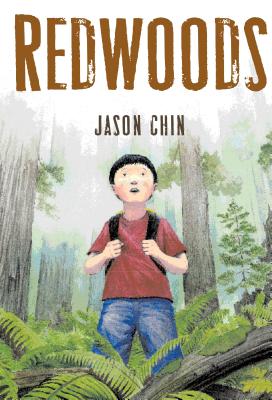 Jason Chin's Redwoods tells the story of a boy who discovers a book about redwoods and finds himself in their midst as he turns the pages.

An ordinary train ride becomes and extraordinary trip to the great ancient forests.

A ordinary subway trip is transformed when a young boy happens upon a book about redwood forests. As he reads the information unfolds, and with each new bit of knowledge, he travels—all the way to California to climb into the Redwood canopy. Crammed with interesting and accurate information about these great natural wonders, Jason Chin's first book is innovative nonfiction set within a strong and beautiful picture storybook. Chin's approach makes Redwoods a must-have common core tool for teachers and librarians introducing scientific principals to young students.

Jason Chin is the author and artist of the award-winning book Redwoods, which Kirkus Reviews called, “An inventive eye-opening adventure.” His work also includes illustrations for Simon Winchester's The Day the World Exploded. He and his wife Deirdre, also an artist, live in Vermont.

Jason Chin is the author and artist of the award-winning book Redwoods, which Kirkus Reviews called, “An inventive eye-opening adventure.” His work also includes illustrations for Simon Winchester's The Day the World Exploded. He and his wife Deirdre, also an artist, live in Vermont.

“Mixing the true and the truly wild, Jason Chin offers up engaging facts about the towering trees of California and Oregon along with bright, captivating illustrations that pluck a kid out of New York City and plunge him into the redwood forest.” —The Washington Post

“The story in the illustrations shows in lovely metaphor how a tiny seed of information can take root in a fertile mind and grow into a strong, fire- and disease-resistant, redwood-sized understanding.” —Los Angeles Times

“This eco-friendly introduction to our state tree relies on straightforward writing for the facts and soft-edged art for a fanciful perspective.” —San Francisco Chronicle

“Chin packs a great deal of information into his succinct text, and the blend of fantasy and realism in his watercolors will charm readers.” —Science magazine

“* Chin's watercolor illustrations capture both the majesty of the redwoods and the young boy's inquisitive personality, and while the idea of a storybook so vivid that it comes to life is not new, what sets this one apart is that Chin has paired his fantastical visual narrative with a straightforward nonfiction text. ” —The Horn Book, starred review

“* The straightforward narrative is given enormous energy by the inventive format and realistic watercolor illustrations--their soft edges and muted hues suit the mist-shrouded giants. Chin adeptly captures the singular and spectacular nature of redwoods in this smartly layered book.” —Publishers Weekly, starred review

“* A real eye-opener. . . . The text clearly and succinctly presents information, which is effectively illustrated in the colorful paintings. Even better, the narrative element in the artwork soars, promising to engage children imaginatively as well as intellectually.” —Booklist, starred review

“The dazzling watercolors create an ingenious journey to highlight the facts.” —The Cleveland Plain Dealer

“This inventive story will charm and educate readers and send their imaginations soaring.” —School Library Journal

“A straightforward and informative text about coastal redwoods captions pictures that tell not exactly a different story, but one whose metafictional cheek will draw readers in--just as the book's hero is drawn, by his imagination, high into the redwood canopy. Science and story are seamlessly pulled together in neatly crafted paintings.” —The Horn Book, a Fanfare 2009 book