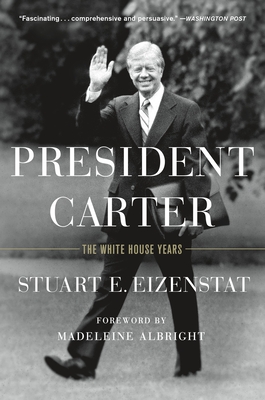 The definitive history of the Carter Administration from the man who participated in its surprising number of accomplishments—drawing on his extensive and never-before-seen notes.

Stuart Eizenstat was at Jimmy Carter’s side from his political rise in Georgia through four years in the White House, where he served as Chief Domestic Policy Adviser. He was directly involved in all domestic and economic decisions as well as in many foreign policy ones. Famous for the legal pads he took to every meeting, he draws on more than 5,000 pages of notes and 350 interviews of all the major figures of the time, to write the comprehensive history of an underappreciated president—and to give an intimate view on how the presidency works.

Eizenstat reveals the grueling negotiations behind Carter’s peace between Israel and Egypt, what led to the return of the Panama Canal, and how Carter made human rights a presidential imperative. He follows Carter’s passing of America’s first comprehensive energy policy, and his deregulation of the oil, gas, transportation, and communications industries. And he details the creation of the modern vice-presidency.

Eizenstat also details Carter’s many missteps, including the Iranian Hostage Crisis, because Carter’s desire to do the right thing, not the political thing, often hurt him and alienated Congress. His willingness to tackle intractable problems, however, led to major, long-lasting accomplishments.

This major work of history shows first-hand where Carter succeeded, where he failed, and how he set up many successes of later presidents.

Stuart is the author of Imperfect Justice and President Carter.

"When I need to find out what I did when I was president—and I say that without exaggeration, because it's really honestly told, I go to Stu Eizenstat's book." —President Jimmy Carter, Maranatha Baptist Church

"A comprehensive and persuasive account of Carter’s presidency that stands far above the familiar confessional and reveal-all accounts by former White House officials we are accustomed to reading. ... Eizenstat offers a compelling narrative filled with colorful stories ... Political junkies and presidential-history buffs will love this book. Eizenstat has succeeded in showing that the Carter presidency had a huge impact on American political life." —The Washington Post

"Eizenstat has produced a thoughtful, measured and compelling account that bemoans Carter’s weaknesses even as it extols his strengths. It fills a gaping void on the presidential bookshelf. Until now, there has never been a satisfying full-length history of [Carter's] presidency. Eizenstat closes that gap." —The New York Times

"Eizenstat’s account is fascinating: detailed, intimate, even page-turning... From Stuart Eizenstat, you can learn a great deal — about Carter, sure, but also about the presidency at large." —The National Review

"It's nearly 1,000 pages long, but...it moves like a rocket, as does he, with seamless writing and exhaustive detail, interviews with everybody and anybody." —Neil Cavuto, Fox News

"It’s clearly, even entertainingly written and worth reading even if you’re not a Carter fan or a student of modern American history or political science. ... To say 'President Carter' is the definitive history of the administration is an understatement." —Atlanta Jewish Times

"Astonishing and instructive" —The Weekly Standard

"President Carter: The White House Years adds tremendously to the growing historiography of the Carter presidency and deserves consideration as the seminal text for historians seeking to understand fully the tumultuous years of 1977-1981. A comprehensive and thorough chronicle of Jimmy Carter's presidency." —Shelf Awareness

"Stuart Eizenstat’s book is something we rarely see — an illuminating, vital and elegant combination of White House insider’s memoir and well-researched history. His excellent work shows us important new dimensions of Jimmy Carter and his Presidency and deserves to be widely read.”
—Michael Beschloss, NBC News Presidential Historian and New York Times bestselling author of The Conquerors

"Stuart Eizenstat has produced a knowing and insightful reassessment of President Carter's administration from the perspective of a clear-eyed insider. Based on his own experiences and hundreds of interviews, he shows how Carter's moral tone and under-appreciated accomplishments offer valuable lessons for our times. It's an important contribution to history."
—Walter Isaacson, New York Times bestselling author of The Innovators and Steve Jobs

"'People never did understand me and still don't,' Jimmy Carter has said. Stuart Eizenstat disproves the claim in this ultimate insider's account of our 39th President, which does for Carter what Robert Sherwood did for FDR, and Ted Sorensen for JFK. His access equaled by his objectivity, Eizenstat places the first New Democrat in historical perspective as a self-confident moralist impatient with incrementalism, uncomfortable with Washington's status quo and the politicians who defer to it. Clearly more consequential, and legislatively successful, than it appears in popular memory, Carter's presidency put a lasting stamp on energy and environmental policy, human rights and the tortuous pursuit of peace in the Middle East. Eizenstat makes it all matter in this highly readable narrative forty years in the making, and well worth the wait."
—Richard Norton Smith, Pulitzer Prize finalist for Thomas E. Dewey and His Times

“Stuart Eizenstat's beautifully written book will become an essential part of our understanding of the Jimmy Carter presidency and of the history of America in the 1970s. No one has described and analyzed the Carter White House and public challenges of the seventies more thoroughly and fairly. This is judicious history every professional historian would be proud to call their own.”
—Robert Dallek, #1 New York Times bestselling author of An Unfinished Life and Pulitzer Prize for History finalist for Nixon and Kissinger

"Stuart Eizenstat's President Carter: The White House Years is an epic biography and first-class administrative history of our vastly underrated 39th president. Such Carter accomplishments as Camp David, the Panama Canal Treaty, Alaska Lands and formal recognition of China pile up in a dramatic fashion. The amount of new documentary evidence unearthed by Eizenstat is staggering. A landmark achievement!"
—Douglas Brinkley, CNN Historian and author of The Unfinished Presidency: Jimmy Carter's Journey Beyond the White House

"Jimmy Carter was one of the most intriguing, and often-times misunderstood, presidents in U.S. history. President Carter: The White House Years, written by Stuart Eizenstat, the Carter Administration’s chief domestic policy adviser, provides an in-depth and inside look at the successes and failures of our nation’s 39th President. It is a compelling read for all interested in this period of American history."
—James A. Baker, III, Secretary of State under President George H.W. Bush, Secretary of the Treasury under President Ronald Reagan, and White House Chief of Staff to Presidents George H.W. Bush and Ronald Reagan

"History may judge Jimmy Carter guilty of too much humanity, but he lacked neither courage, nor conviction, nor, in the final analysis, real and lasting achievements. This is an important and long overdue assessment."
—Ted Koppel, broadcast journalist, former anchor of ABC's Nightline

"Stuart Eizenstat has poured heart and soul, reams of contemporaneous notes, lengthy interviews, and personal reflections into the definitive saga of Jimmy Carter’s presidency, with all its shining promise of a new beginning to its ultimate disappointment in the sands of the Middle East. I’m glad he has done so. It’s a fascinating read about life in the White House, day by day, week by week, called upon to respond to crises domestic and international, all complicated by political differences in the President’s own party....Eizenstat’s research and recollections remind us that the 'man from Georgia' was also a man of principle and substance, with substantial accomplishments in office."
—Paul Volcker, Chairman of the Federal Reserve under Presidents Jimmy Carter and Ronald Reagan

"An admiring but also very frank account of Jimmy Carter’s presidency by the ultimate insider, Stuart Eizenstat. He’s honest about Carter’s weaknesses, as well as his strengths, and he reveals some details that have never been reported before. His summation of 'what ifs' at the end of the book makes haunting reading. This memoir reminds us that during the Carter years, we had a smart, decent but unlucky man in the Oval Office."
—David Ignatius, columnist, The Washington Post