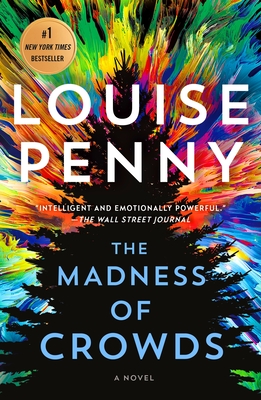 This is book number 17 in the Chief Inspector Gamache Novel series.

Pre-Order here to get a special bookmark, while supplies last!

Time and again, as the New Year approaches, that charge is leveled against Armand Gamache.

While the residents of the Québec village of Three Pines take advantage of the deep snow to ski and toboggan, to drink hot chocolate in the bistro and share meals together, the Chief Inspector finds his holiday with his family interrupted by a simple request.

He’s asked to provide security for what promises to be a non-event. A visiting Professor of Statistics will be giving a lecture at the nearby university.

While he is perplexed as to why the head of homicide for the Sûreté du Québec would be assigned this task, it sounds easy enough. That is until Gamache starts looking into Professor Abigail Robinson and discovers an agenda so repulsive he begs the university to cancel the lecture.

They refuse, citing academic freedom, and accuse Gamache of censorship and intellectual cowardice. Before long, Professor Robinson’s views start seeping into conversations. Spreading and infecting. So that truth and fact, reality and delusion are so confused it’s near impossible to tell them apart.

Abigail Robinson promises that, if they follow her, ça va bien aller. All will be well. But not, Gamache and his team know, for everyone.

When a murder is committed it falls to Armand Gamache, his second-in-command Jean-Guy Beauvoir, and their team to investigate the crime as well as this extraordinary popular delusion.

And the madness of crowds.

LOUISE PENNY is the author of the #1 New York Times, USA Today, and Globe and Mail bestselling series of Chief Inspector Armand Gamache novels, and coauthor with Hillary Rodham Clinton of the #1 New York Times bestselling thriller State of Terror. She has won numerous awards, including a CWA Dagger and the Agatha Award (seven times), and was a finalist for the Edgar Award for Best Novel. In 2017, she received the Order of Canada for her contributions to Canadian culture. Louise lives in a small village south of Montréal.

Praise for The Madness of Crowds

“This series has always excelled... This new novel grapples successfully with the moral weight of its narrative… ‘All Will Be Well’ never sounded so menacing.”
—The New York Times Book Review

“The best mysteries and thrillers rise to the level of social novels, presenting readers opportunities to confront the difficult issues we face. Penny’s novels have always been driven by this (as well as the love of family and friends). The Madness of Crowds may be one of Penny’s darkest works, but we can still find comfort in the natural beauty of Three Pines and the quirky residents we would love to have as our neighbors.”
—Washington Post

“Timely and thrilling… faithful readers know that one of Penny’s books is less a single-serving crime tale than a full spread of fiction. The mystery may be the main course, but the side dishes — the food for thought, and the food at the Bistro; the people and their lives and, yes, loves; and certainly the setting itself — combine to create a full banquet for readers, one liberally seasoned with dry humor. The Madness of Crowds is one of the richest and most satisfying banquets yet.”
—St. Louis Post-Dispatch

“The mystery part of the books is always compelling and provides narrative drive, but Penny’s books are so rich because she provides real food for thought and gives those thoughts emotional grounding… another brilliant entry.”
—Mystery Scene Magazine

“Louise Penny, who in her seventeenth installment in the beloved Armand Gamache series, has tackled COVID and its consequences head-on. The book describes how everyday life in the tiny hamlet of Three Pines has changed while also exploring the threat of a statistician who is using the pandemic data as ammunition for a eugenics program. Plus one for the Canadians.”
—CrimeReads

“Penny’s optimism about the future shines brightly through Gamache’s family and Three Pines, and hopefully will shine into your heart as well.”
—BookTrib

“It’s easily one of the best mystery novels (or novels of any genre) in recent memory.”
—BookPage (Starred Review)

“Always a master plotter, Penny brilliantly combines this main story line with a profusion of subplots that bring together multiple interconnected themes, all raising thought-provoking questions about ethics and human relationships in a post-COVID world. Gamache's longtime belief in our common humanity is severely tested here, but, finally, it is that belief and the actions deriving from it that seem to offer the only balm for our lingering bruises.”
—Booklist (Starred Review)

“With The Madness of Crowds, [Penny] is one of the first crime fiction authors to tackle the pandemic and its aftermath head-on and in doing so becomes almost a literary Oracle at Delphi, mapping out both the rewards and the pitfalls facing society after such an unprecedented and seismic pandemic. In the end, The Madness of Crowds stands as one of the best novels in Louise Penny’s excellent, and now iconic, series.”
—BOLO Books