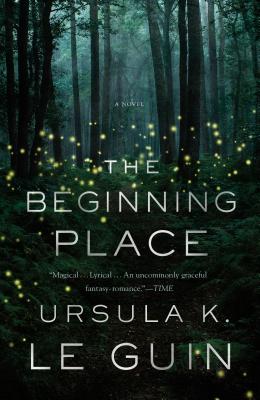 Fleeing from the monotony of his life, Hugh Rogers finds his way to "the beginning place"—a gateway to Tembreabrezi, an idyllic, unchanging world of eternal twilight.

Irena Pannis was thirteen when she first found the beginning place. Now, seven years later, she has grown to know and love the gentle inhabitants of Tembreabrezi, or Mountaintown, and she sees Hugh as a trespasser.

But then a monstrous shadow threatens to destroy Mountaintown, and Hugh and Irena join forces to seek it out. Along the way, they begin to fall in love. Are they on their way to a new beginning...or a fateful end?

Ursula K. Le Guin (1929-2018) was the author of more than three dozen books for children and adults, including her groundbreaking novels The Left Hand of Darkness and The Dispossessed, both honored with Nebula and Hugo awards for best novel. She was also awarded a Newbury Honor for the second volume of the Earthsea Cycle, The Tombs of Atuan, and among her many other distinctions are the Margaret A. Edwards Award, a National Book Award, and additional Nebula and Hugo awards. Her other books include The Eye of the Heron, The Word for World is Forest, and the Hainish series. In 2014, Le Guin was named the Medalist for Distinguished Contribution to American Letters by the National Book Foundation.

“Like all great writers of fiction, Ursula K. Le Guin creates imaginary worlds that restore us, hearts eased, to our own.” —The Boston Globe

“Genre cannot contain Ursula Le Guin: she is a genre in herself.”—Zadie Smith

“Ursula Le Guin can lift fiction to the level of poetry and compress it to the density of allegory.” —Jonathan Lethem