Unbreakable: The Spies Who Cracked the Nazis' Secret Code (Hardcover) 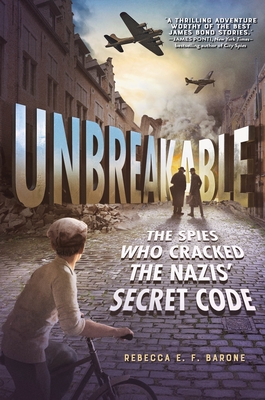 Unbreakable: The Spies Who Cracked the Nazis' Secret Code (Hardcover)

Unbreakable is the edge-of-your seat true story of the codebreakers, spies, and navy fighters who cracked the Nazis’ infamous Enigma encryption machine and turned the tide of World War II—perfect for fans of The Imitation Game.

As the Germans waged a brutal war across Europe, details of every Nazi plan, every attack, every troop movement were sent over radio. But to the Allied troops listening in—and they were always listening—the crucial messages sounded like gibberish. The communications were encoded with a powerful cipher, making all information utterly inaccessible . . . unless you could unlock the key to the secret code behind the German’s powerful Enigma machine.

Complete with more than sixty historical photos, Unbreakable tells the true story of one of the most dangerous war-time codebreaking efforts ever. While Hitler marched his troops across newly conquered lands and deadly “wolfpacks” of German U-Boats prowled the open seas, a team of codebreakers, spies, and navy men raced against the clock to uncover the secrets that hid German messages in plain sight. Victory—or defeat—in World War II would hinge on their desperate attempts to crack the code.

Unbreakable is a groundbreaking work of narrative nonfiction from Rebecca E. F. Barone, the author of Race to the Bottom of the Earth (recipient of four starred reviews)—perfect for fans of Bomb, The Boys Who Challenged Hitler, and The Nazi Hunters.

An Amazon Best Book of the Year!

Rebecca E. F. Barone holds a Bachelor of Arts in English and a Bachelor of Science in Mechanical Engineering from Bucknell University along with multiple graduate degrees in mechanical engineering. Her technical projects include injury analysis for the National Football League, and her short-form STEM writing has been published in the award-winning Muse magazine. She is passionate about serving and mentoring underrepresented populations in STEM. She is also the author of Race to the Bottom of the Earth: Surviving Antarctica (which received four starred reviews).

* "Engagingly told as a grim race against time, deeply researched, and with ample space for the play of differing perspectives and outsized personalities . . . highly recommended." —School Library Journal, starred review

"A thrilling adventure of intrigue and daring worthy of the best James Bond stories and made all the better because it’s completely true. A common refrain throughout the story is, 'Never repeat something you want kept secret.' So let me say twice, to ensure that word gets out, 'Read this book. Read this book.'" —James Ponti, New York Times best-selling author of City Spies

“A taut, suspenseful story. Here is a war that few people know, a race among brains with freedom at stake, brought vividly to life by.” —Phillip Hoose, author of the National Book Award winning and Newbery Honor book Claudette Colvin: Twice Toward Justice

"A captivating tale of perseverance and grit, Barone kept me on the edge of my seat, reading well into the night. I could not put it down. " —Beth McMullen, author of the Mrs. Smith's Spy School for Girls series and the Lola Benko, Treasure Hunter series


Praise for Race to the Bottom of the Earth:

"I raced to the end of this book!" —Alan Gratz, New York Times–bestselling author of Refugee

"A riveting tribute to epic tests of men against the elements." —Kirkus, starred review

"Readers will be caught up in the real-time action sequences." —Booklist, starred review