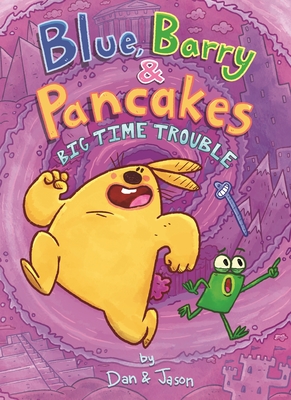 This is book number 5 in the Blue, Barry & Pancakes series.

The fifth volume of the emerging readers graphic novel series about three friends (a bunny, a worm, and a frog) whose adventures are driven by their very different personalities. Perfect for fans of Narwhal & Jelly and Elephant & Piggie!

One night, Blue prepares to read a poem to an audience of friends from around the neighborhood. But just before he takes the stage, he’s frozen with stage fright. The gang decides to travel back in time to borrow a good luck charm from one of Blue’s poet ancestors in the hopes that holding it will make Blue brave. But once Blue gets one charm, he realizes he needs one more. And then another one. And then another one…will Blue ever feel bold enough to take the stage, or will these three friends be looping back in time forever?!

Like all friends, Blue, Barry, and Pancakes can make mistakes... but at the end of the day, they always have each other’s backs. And tops, and sides, and fronts, too!

Dan & Jason go back. Waaaaay back. They have directed award-winning commercials, created hit cartoon shows, and even sold a feature-film concept, but nothing has prepared them for this... the pinnacle of their storied career: publishing the hilarious and heartwarming comic tales of Blue, Barry & Pancakes?! Dan & Jason have packed it with everything they know about drawing, writing, and the enduring power of friendship. Please enjoy their comic book debut! They make everything together. They think it, draw it, write it, mix it, bake it, and serve it together. Teamwork!

Dan Abdo and Jason Patterson have been making stuff together for a very looong time! They created the animated television program Rocket Monkeys, and they’ve directed countless animated commercials for major global brands. Their short films have won numerous awards and their cartoons and comics have been published in The New Yorker and Nickelodeon magazine. Through all these different mediums their humor and storytelling always rings sweet, silly, and slightly twisted. Together at First Second, they've produced several volumes of Blue, Barry & Pancakes, a zany story about three animal friends who go on out-of-this-world adventures!

Jason Patterson and Dan Abdo met in the back of the art room in highschool, started drawing together, and never stopped. They both attended the Rhode Island School of Design and then both moved to New York City to begin their world conquest. These days Jason has jumped across the Hudson to live in New Jersey with his wife and two children. Dan returned to the place where it all started and lives in Vermont with his wife, two children, six chickens, two ducks, and one ancient cat. Even though they’re hundreds of miles apart they still draw together every day. Together at First Second, they've produced several volumes of Blue, Barry & Pancakes, a zany story about three animal friends who go on out-of-this-world adventures!

"[Dan and Jason] fill energetic and cinematic panels with sound effects and screwball comedy, resulting in an absurd tale of friendship that never stops moving."—Publisher's Weekly

"Rapidly paced and loaded with absurdity and laughs, dynamic cartoon illustrations sweep readers along on a journey designed to humorously upend their expectations. A happy ending and gentle lesson on friendship close what is happily the first of many escapades."—Booklist