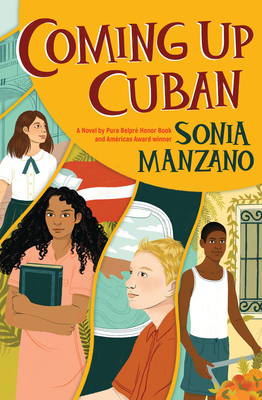 
Usually ships in 2-5 days
From Pura Belpré Honoree and Emmy-award winning actor Sonia Manzano--best known as "Maria" from Sesame Street--comes the expansive and timeless story of four children who must carve out a path for themselves in the wake of Fidel Castro's rise to power.Fifteen-time Emmy Award winner and Pura Belpre honoree Sonia Manzano examines the impact of the 1959 Cuban Revolution on four children from very different walks of life. In the wake of a new regime in Cuba, Ana, Miguel, Zulema, and Juan learn to find a place for themselves in a world forever changed. In a tumultuous moment of history, we see the lasting effects of a revolution in Havana, the countryside, Miami, and New York. Through these snapshot stories, we are reminded that regardless of any tumultuous times, we are all forever connected in our humanity.
Sonia Manzano has affected the lives of millions since the early 1970s, as the actress who defined the role of "Maria" on the acclaimed television series Sesame Street. Sonia has won fifteen Emmy Awards for her television writing and is the recipient of a Lifetime Achievement Award from the Academy of Arts and Sciences. People magazine named Sonia one of America's most influential Hispanics. She lives in New York City.
Praise for THE REVOLUTION OF EVELYN SERRANO:*"This wry, moving debut novel does a great job of blending the personal and the political. . . while the family drama and revelations continue right up to the end."--BOOKLIST, starred review *"Characters of surprising dimension round out the plot and add to the novel's cultural authenticity. . . A stunning debut."--KIRKUS, starred reviewCELEBRITY ENDORSEMENTS "An important story about activism, acceptance, and love. Sonia Manzano vividly portrays a neighborhood in turmoil, with embraceable characters who change history."--Pam Muñoz Ryan, Pura Belpré Award-winning author of The Dreamer and Esperanza Rising "The Revolution of Evelyn Serrano should be placed on proud display with the literature that enriches our multicultural America. History will come alive for young readers who will identify with how a great historic moment can affect one girl and her family."--Julia Alvarez, Pura Belpré Award-winning author of Before We Were Free and How the García Girls Lost Their Accents"This novel is meant to be savored in delicious bites. I loved its snap and down-home-El Barrio-in-your-face-tell-it-like-it-is tone."--Oscar Hijuelos, Pulitzer Prize-winning author of The Mambo Kings Play Songs of Love "Thank you, Sonia Manzano, for capturing important moments for Puerto Ricans, and for reminding us that history doesn't just happen, we live with it and with its consequences."--Esmeralda Santiago, Alex Award-winning author of Almost a Woman and When I was Puerto Rican"The Revolution of Evelyn Serrano underscores the struggle that triumphed in the lives of Latinos. Here is a book that creates indelible political awareness."--Nicholasa Mohr, National Book Award Finalist, author of El Bronx Remembered"I love this book! It's smart, real, painfully funny, and filled with the wisdom of a writer who can get to the hearts and souls of her readers. Sonia Manzano, standing ovation! (Encore, please!)"--John Leguizamo, Emmy Award winning actor-comedian