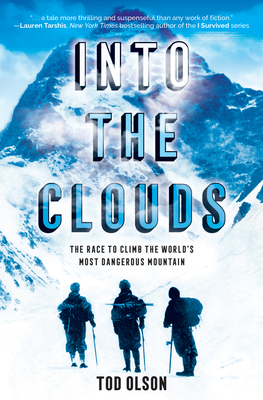 A nail-biting tale of survival and brotherhood atop one of the deadliest mountains on Earth.
In 1953, as two men summit Mt. Everest for the first time, Charlie Houston and a team of mountaineers carve a path up the second-highest peak on Earth: the deadly K2. Four Houston, reaching the top of K2 is a lifelong dream, an obsession that began 15 years earlier on his first expedition there.

Since then, another American expdition has fallen apart on the remote, windswept mass of rock and ice.

Now, Houston's team follows in their tracks. With the summit in their grasp, a vicious storm and a sudden illness puts their own expedition on the edge of disaster, turning their qust to conquer a mountain into one of the most daring rescue missions ever.

Three expeditions and a high-mountain rivalry. Three attempts at K2, one of the most grueling challenges the planet has to offer. Filled with displays of incredible strength and heart-stopping danger, Into the Clouds is the thrilling story of the men whose quest to conquer a mountain became a battle to survive the descent.

Tod Olson is the author of the Lost series, the How to Get Rich historical fiction series, and numerous books for the school/library and classroom markets. He has written for national magazines on the Columbine school shooting, homeless teens, the murder of Matthew Shepard, and many other stories of interest to children and young adults. During his 25 years in children's publishing, he has edited and developed several collections of books for both school/library and the classroom. Tod holds an MFA from Vermont College.

"This non-stop action adventure is narrative nonfiction at its best." -- School LIbrary Connection

"Tod Olson turns this true story into a tale more thrilling and suspenseful than any work of fiction." -- Lauren Tarshis, New York Times bestselling author of the I Survived series

"This harrowing adventure story practically puts you on the slopes of K2 with the climbers. You'll feel yourself gasping for oxygen, stamping your feet to fight off frostbite, and wrestling with the ultimate decision: Do you turn back while you still can, or make one last try for the summit?" -- Steve Sheinkin, award-winning author of Bomb and Undefeated