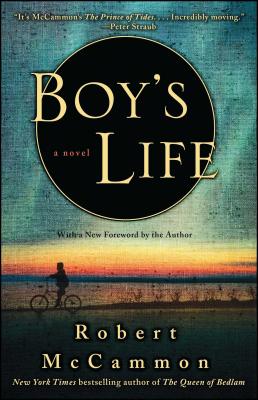 
On Our Shelves Now
Robert McCammon delivers “a tour de force of storytelling” (BookPage) in this award-winning masterpiece, a novel of Southern boyhood, growing up in the 1960s, that reaches far beyond that evocative landscape to touch readers universally.

Boy’s Life is a richly imagined, spellbinding portrait of the magical worldview of the young—and of innocence lost.

Zephyr, Alabama, is an idyllic hometown for eleven-year-old Cory Mackenson—a place where monsters swim the river deep and friends are forever. Then, one cold spring morning, Cory and his father witness a car plunge into a lake—and a desperate rescue attempt brings his father face-to-face with a terrible, haunting vision of death. As Cory struggles to understand his father’s pain, his eyes are slowly opened to the forces of good and evil that surround him. From an ancient mystic who can hear the dead and bewitch the living, to a violent clan of moonshiners, Cory must confront the secrets that hide in the shadows of his hometown—for his father’s sanity and his own life hang in the balance…
Robert McCammon is the New York Times bestselling author of Boy’s Life and Gone South, among many critically acclaimed works of fiction, with millions of copies of his novels in print. He is a recipient of the Bram Stoker Lifetime Achievement Award, the Grand Master Award from the World Horror Convention, and is a World Fantasy Award winner. He lives in Alabama. Visit the author at RobertMcCammon.com.
"Wonderful...filled with enough adventures, joy, discovery, and heartache for a dozen boys' lifetimes." -- Houston Chronicle

"No one can paint word pictures as vividly as Robert McCammon." -- Sandra Brown

"It's McCammon's The Prince of Tides.... Incredibly moving." -- Peter Straub