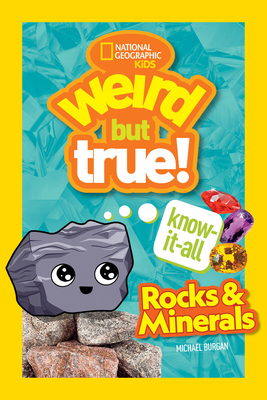 
Will Ship in 1-5 Days from our Distributor
Did you know that Montana’s Grasshopper Glacier is filled with millions of frozen locusts that got caught in a storm more than 300 million years ago? Or that gneiss is one of the world’s oldest rock forms? One sample from Canada is more than FOUR BILLION years old! In this latest single-subject Weird But True! book, readers will have a blast discovering that there’s a lot more to rocks and minerals than meets the eye.

This book is perfect for budding geologists or any kid who likes to get to the bottom of things, such as how volcanoes work or the difference between fool’s gold and actual gold. Prepare to be dazzled by our rockin’ world!

Also includes:
MICHAEL BURGAN is an award-winning children’s author with more than 25 years in the industry. His past books include Shadow Catcher, a Woodson Honor Book; Tank Man; Who Was Henry Ford?; and Who Was Theodore Roosevelt?.