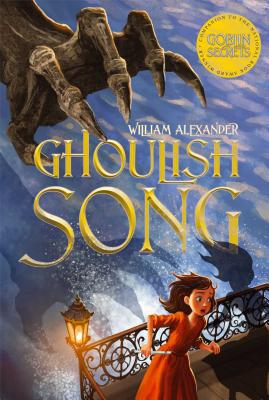 
On Our Shelves Now
A brave girl flees a ghoul while trying to save her city in this lively companion to Goblin Secrets, the National Book Award winner that Kirkus Reviews calls “humorous, poignant, and convincing.”

Kaile lives in Zombay, an astonishing city where goblins walk the streets and witches work their charms and curses. Kaile wants to be a musician and is delighted when a goblin gives her a flute carved out of bone. But the flute’s single, mournful song has a dangerous consequence: it separates Kaile and her shadow.

Anyone without a shadow is considered dead, and despite Kaile’s protests that she’s alive and breathing, her family forces her to leave so she can’t haunt their home. Kaile and her shadow soon learn that the troublesome flute is tied to a terrifying ghoul made from the bones of those who drowned in the Zombay River. With the ghoul chasing her and the river threatening to flood, Kaile has an important role to play in keeping Zombay safe. Will Kaile and her shadow be able to learn the right tune in time?

Set in the delightful and dangerous world of Goblin Secrets, Ghoulish Song is a gripping adventure laced with humor and mystery from National Book Award–winning author William Alexander. His “graceful prose weaves an engaging fantasy that embraces the power of music” (Publishers Weekly).
William Alexander won the National Book Award for his debut novel, Goblin Secrets, and won the Earphones Award for his narration of the audiobook. His other novels include A Festival of Ghosts, A Properly Unhaunted Place, Ghoulish Song, Nomad, and Ambassador. William studied theater and folklore at Oberlin College, English at the University of Vermont, and creative writing at the Clarion workshop. He teaches in the Vermont College of Fine Arts MFA program in Writing for Children and Young Adults. Like the protagonist of Nomad and Ambassador, William is the son of a Latino immigrant to the US. Visit him online at WillAlex.net and GoblinSecrets.com, and on Twitter via @WillieAlex.
"In Ghoulish Song, William Alexander returns us to the fascinatingly sinister world of Zombay. As with his previous novel, Goblin Secrets, Alexander's work is startlingly original, simultaneously funny and suspenseful."
— Peter S. Beagle, author of The Last Unicorn

“Alexander’s storytelling is compelling and clever, and this tale of courage is by turns humorous, poignant and convincing.”
— Kirkus Reviews

"With wonderful economy, Mr. Alexander conjures a vertiginous adventure shot through with humor in this clever tale."
— Wall Street Journal

"Kaile makes a likable heroine, at times admirably noble and at other times understandably frustrated and defiant. Her adventures are just scary enough to keep readers on edge without giving anyone nightmares."
— BCCB