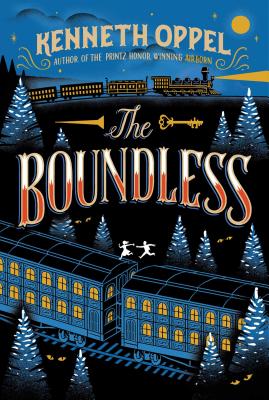 — From Tatum's Totes
The Boundless, the greatest train ever built, is on its maiden voyage across the country, and first-class passenger Will Everett is about to embark on the adventure of his life!

When Will ends up in possession of the key to a train car containing priceless treasures, he becomes the target of sinister figures from his past.

In order to survive, Will must join a traveling circus, enlisting the aid of Mr. Dorian, the ringmaster and leader of the troupe, and Maren, a girl his age who is an expert escape artist. With villains fast on their heels, can Will and Maren reach Will’s father and save The Boundless before someone winds up dead?

“Canadian railway history, fantasy, a flutter of romance—and a thoughtful examination of social injustice—collide in this entertaining swashbuckler from the author of Printz Honor–winning Airborne” (Kirkus Reviews, starred review).
Kenneth Oppel is the author of numerous books for young readers. His award-winning Silverwing trilogy has sold over a million copies worldwide and been adapted as an animated TV series and stage play. Airborn won a Michael L. Printz Honor Book Award and the Canadian Governor General’s Literary Award for children’s literature; its sequel, Skybreaker, was a New York Times bestseller and was named Children’s Novel of the Year by the London Times. He is also the author of Half Brother, This Dark Endeavor, Such Wicked Intent, and The Boundless. Born on Canada’s Vancouver Island, he has lived in Nova Scotia and Newfoundland, Canada; in England and Ireland; and now resides in Toronto with his wife and children. Visit him at KennethOppel.ca.
* "An epic journey novel with a distinctive setting, a powerful sense of adventure, and just a whiff of steampunk."
— Booklist, starred review