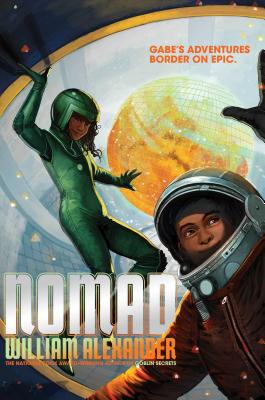 
Email or call for price
Gabe Fuentes is in a race against time—and aliens—in this intergalactic sequel to Ambassador, which Booklist called “an exciting sci-fi adventure, perceptively exploring what it means to be alien,” from National Book Award winner William Alexander.

When we last left Earth’s Ambassador, Gabe Fuentes, he was stranded on the moon. And when he’s rescued by Kaen, another Ambassador, things don’t get better: It turns out that the Outlast— a race of aliens that has been systematically wiping out all other creatures—are coming. And they’ve set their sights on Earth.

Enter Nadia. She was Earth’s Ambassador before Gabe, but left her post in order to stop the Outlast. Nadia has discovered that the Outlast can conquer worlds by travelling fast through lanes created by the mysterious Machinae. No one has communicated with the Machinae in centuries, but Nadia is determined to try, and Gabe and Kaen want to help her. But the three Ambassadors don’t know that the Outlast have discovered what they are doing, and have sent assassins to track them down.

As Nadia heads deeper into space to find the Machinae, Gabe and Kaen return to Earth, where Gabe is trying to find another type of alien—his father, who was deported to Mexico, and who Gabe is desperate to bring home. From a detention center in the center of the Arizona desert to the Embassy in the center of the galaxy, the three Ambassadors race against time to save their worlds in this exciting, funny, mind-bending adventure.
William Alexander won the National Book Award for his debut novel, Goblin Secrets, and won the Earphones Award for his narration of the audiobook. His other novels include A Festival of Ghosts, A Properly Unhaunted Place, Ghoulish Song, Nomad, and Ambassador. William studied theater and folklore at Oberlin College, English at the University of Vermont, and creative writing at the Clarion workshop. He teaches in the Vermont College of Fine Arts MFA program in Writing for Children and Young Adults. Like the protagonist of Nomad and Ambassador, William is the son of a Latino immigrant to the US. Visit him online at WillAlex.net and GoblinSecrets.com, and on Twitter via @WillieAlex.
"Crackerjack adventure."
— Kirkus Reviews, starred review