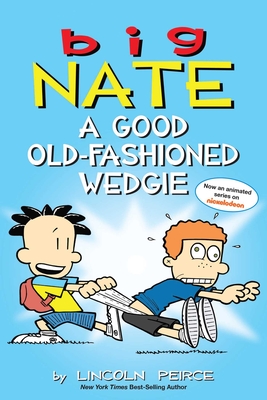 This is book number 17 in the Big Nate series.

Now an animated series with Paramount+ and Nickelodeon!

Join the unstoppable Big Nate for another round of middle school adventures! From homework and hygiene to hilarious hiijnks—no one quite does sixth grade like Nate and his friends.

Need a way to shut up some snooty kid when he gloats about his private school? Looking for the perfect response when your best friend joins the grammar police? Want a quick and easy way to out-snap even the snappiest comeback? Nate Wright has the answer: a good old-fashioned wedgie!

The whole gang from P.S. 38 is back for more hijinks, hilarity, and underwear hoisting in this new collection of Big Nate comics. Can Chad somehow survive on a diet of kale and soy nuts? Are Jenny and Artur EVER going to break up? And how is Nate supposed to concentrate on baseball when he’s got a crush on his team’s new pitcher? See for yourself! Join Nate and the rest of the crew for another unforgettable round of middle school adventures!
Lincoln Peirce has been drawing the Big Nate comic strip for more than 20 years. Born in Ames, Iowa, Peirce grew up in Durham, New Hampshire. As a kid, he began creating his own strips in the sixth grade. Peirce taught high school in New York City and has created several animated pilots for Cartoon Network and Nickelodeon. He lives in Portland, Maine, with his family.