Younger Next Year for Women: Live Strong, Fit, Sexy, and Smart—Until You’re 80 and Beyond (Paperback) 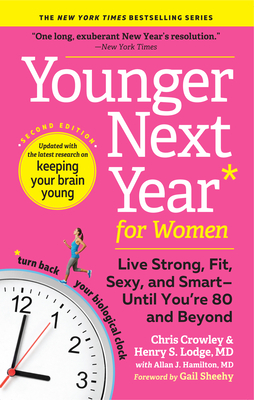 Younger Next Year for Women: Live Strong, Fit, Sexy, and Smart—Until You’re 80 and Beyond (Paperback)

A book of hope, Younger Next Year for Women shows you how to become functionally younger for the next five to ten years, and continue to live thereafter with newfound vitality. Learn how the Younger Next Year plan of following “Harry’s Rules”—a program of exercise, diet, and maintaining emotional connections—will not only help you turn back your physical biological clock, but will improve memory, cognition, mood, and more. In two new chapters, prominent neurologist Allan Hamilton explains how the program directly affects your brain—all the way down to the cellular level—while Chris Crowley, in his inimitable voice, gives the personal side of the story. In other words, how to live brilliantly for the three decades or more after menopause. The results will be amazing.

Chris Crowley is a former litigator (Davis Polk & Wardwell), the coauthor, with Henry S. Lodge, of the Younger Next Year books, and the coauthor, with Jen Sacheck, PhD, of Thinner This Year. Though in his eighties, he fully lives the life, skiing black diamonds and routinely doing thirty-mile bike rides. He and his wife live in Connecticut and New York City.

Allan J. Hamilton, MD, FACS, a Harvard-trained brain surgeon, is the executive director of the Arizona Simulation Technology and Education Center. Dr. Hamilton has authored more than 20 medical textbook chapters and 50 peer-review research articles, and has served on the editorial board of several medical journals. He is the author of The Scalpel and the Soul, Zen Mind, Zen Horse, and Lead with Your Heart. He lives near Tucson, Arizona.

Gail Sheehy is the author of 17 books, including Passages, which was named one of the most important books of our time by Library of Congress. As a literary journalist, Sheehy was one of the original contributors to New York magazine and has been a contributing editor to Vanity Fair since 1984.  She has covered national and world leaders and broken many cultural taboos.