On the Farm (Board book) 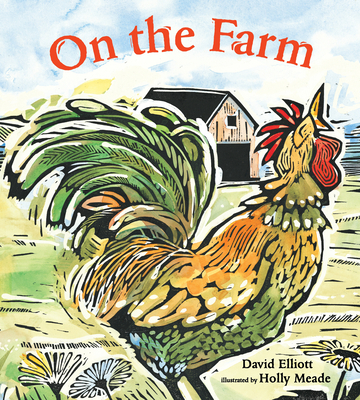 On the Farm (Board book)


Will Ship in 1-5 Days from our Distributor
A New York Times best-selling author and a Caldecott Honor-winning illustrator evoke life on a farm in a simple, lyrical text and boldly expressive images.

From the bull to the barn cat to the wild bunny, the farmyard bustles with life. The rooster crows, the rams clash, the bees buzz, and over there in the garden, a snake — silent and alone — winds and watches. David Elliott’s graceful, simple verse and Holly Meade’s exquisite woodcut and watercolor illustrations capture a world that is at once timeless yet disappearing from view — the world of the family farm.
As well as being an author David is also a professor at Colby-Sawyer College in New London, New Hampshire.

Holly Meade (1956-2013) wrote and illustrated If I Never Forever Endeavor. She earned a Caldecott Honor for her illustrations in Hush! A Thai Lullaby by Minfong Ho. She also illustrated And Then Comes Halloween by Tom Brenner; On the Farm, In the Wild, and In the Sea by David Elliott; and many others.
From an alluring cover with a rooster in full crow to its concluding, gently ironic ode to the silence of rabbits, this book will make an unusually interesting choice for farm-animal storytimes.
—The Horn Book (starred review)

Handsome…From toddlers to the youngest poets, children will delight in the fun and beauty on display here.
—Booklist (starred review)

[The text is] pithy and crisply rhymed, making for easy reading and listening…Meade’s watercolored woodblock illustrations are elegant yet homely, cheerfully depicting the unpolished charm of a well-filled pigpen.
—BCCB

Like the vibrant rooster on this oversize book's jacket, Meade's colored woodcut prints are so bold they seem to crow at the reader.
—Publishers Weekly

Elliott’s verses capture a reverence for animals unfamiliar to cityfolk, and Meade’s watercolor and woodcut illustrations…are serene and beautiful.
—BookPage

The woodblock prints and watercolors…are detailed and enchanting.
—The Capital Times

This is one picture book that your preschooler will want read over and over again.
—Eclectic Homeschool Online

David Elliott’s graceful, simple verse and Holly Meade’s exquisite woodcut and watercolor illustrations capture a world that is at once timeless yet disappearing from view — the world of the family farm.
—Anokaberry blog

A delightful collection of poems that are funny, beautifully descriptive, and perfect for reading out loud.
—Through the Looking Glass Reviews