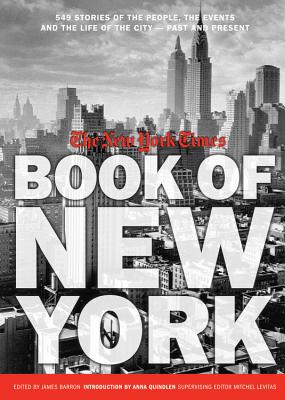 This unique volume uncovers the most fascinating and compelling stories from The New York Times about the city the paper calls home.

More than 200 articles and an abundance of photographs, illustrations, maps, and graphs from the preeminent newspaper in the world take a look at the history and personality of the world's most influential city. Read firsthand accounts of the subway opening in 1904 and the day the Metrocard was introduced; the fall of Tammany Hall and recurring corruption in city politics; the Son of Sam murders; jazz clubs in the 1920s and legendary performances at the Fillmore East; baseball's Jackie Robinson breaking the color barrier at Brooklyn's storied Ebbets Field in 1947; the 1977 and 2004 blackouts; the openings and closings of the city's most beloved restaurants; and much more. Not just a historical account, this is a fascinating, sometimes funny, and often moving look at how people in New York live, eat, travel, mourn, fight, love, and celebrate.

The New York Times is regarded as the world's preeminent newspaper. Its news coverage is known for its exceptional depth and breadth, with reporting bureaus throughout the United States and in twenty-six foreign countries. Winner of 112 Pulitzer Prizes, the Times has the largest circulation of any seven-day newspaper in the U.S.

James Barron is a reporter on the metropolitan staff of the Times. He wrote the minute-by-minute stories on the 9/11 attacks for the New York Times on the web and the front-page lead story on the 2003 blackout. He initiated the "Public Lives" column (later called "Boldface Names") and currently writes a podcast for the Times's website summarizing the next morning's front page. Barron wrote the timeline summaries for The New York Times: The Complete Front Pages :1851 - 2008, and is the author of Piano: The Making of a Steinway Concert Grand.
Like us on Facebook
Follow us on Twitter
Follow us on Instagram