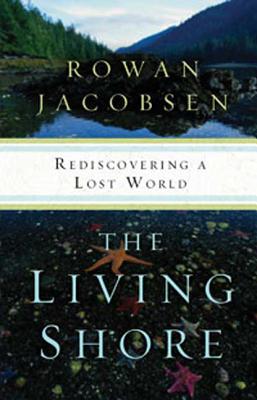 Modeled on John Steinbeck's "The Sea of Cortez," a slim, beautiful volume containing a goodnews environmental story about how an oyster could help restore our oceans.
In the 1990s, a marine scientist named Brian Kingzett was commissioned to survey Canada's western coast. He saw amazing sights, from the wildest, most breathtaking coasts to the smallest of marine creatures. Along the western side of Vancouver Island, Kingzett nosed into an isolated pocket beach where he found something unusual. Amid the mussels, barnacles, and clams were round oysters Olympias. Kingzett noted their presence and paddled on. A decade later when he met Betsy Peabody, executive director of the Puget Sound Restoration Fund (PSRF), he learned that this once ubiquitous native oyster was in steep decline, and he knew that together they would return to this remote spot.

Rowan Jacobsen, along with Kingzett, Peabody, and a small group of scientists from PSRF and the Nature Conservancy, set out last July to see if the Olys were still surviving and if they were, what they could learn from them. The goal: to use their pristine natural beds, which have probably been around for millennia, as blueprints for the habitat restoration efforts in Puget Sound. The implications are vast. If Peabody and her team can bring good health back to Puget Sound by restoring the intertidal zones the areas of land exposed during low tide and submerged during high tide, where oysters live their research could serve as a model for saving the world's oceans.

During a time when the fate of the oceans seems uncertain, Rowan Jacobsen has found hope in the form of a small shelled creature living in the lost world where all life began.

Rowan Jacobsen is the James Beard Award- winning author of A Geography of Oysters and Fruitless Fall. Jacobsen's writings on food, the environment, and their interconnected nature have appeared in the New York Times, Wild Earth, Harper's, Eating Well, and Newsweek. He lives in rural Vermont with his wife and son.

"A science-rich yet lambent investigation into the fate of the Olympia oyster... Jacobsen is an artful storyteller, giving the oyster’s story an aching bite. He is also a fine explicator, drawing clearly the pivotal role of the oyster in estuarine health...  The author ruminates on some fascinating ideas, from prehistoric clam gardens to the role of shellfish in tool-making to the shoreline-based theory of human origins, which holds that inhabitants of the coast benefited from the easy harvest of brain-enriching fish and shellfish. Lovely science writing, and a smart look into where the work of ecological restoration is headed." –Kirkus

"In 2008, [Jacobsen] signed on as the literary chronicler of a nine-member expedition to the pristine coast of British Columbia... It's not giving away any punch lines to reveal that Jacobsen's expedition found a remote estuary off the coast of Vancouver Island that is literally paved with Olympia oysters, and that  the resulting ecological data may provide the key to a resurgence of the species in bays and raw bars along the Northwest coast. But Jacobsen's experience also provided him with food for thought. Just as agriculture led to the spread of civilization in the Old World, he believes, aquaculture may have spread civilization in the New World... He's equally persuasive in urging the preservation and protection of native shellfish habitats. After all, the oyster is his world - and the world, it seems to me, is his oyster." - Natural History

“What too many of us so simply regard as the oyster, Rowan Jacobsen reveals as living gold—as currency of coastal cultures, engineer of ecosystems, the champagne toast of societies through the ages. Through Jacobsen’s admiring eyes, we see the mystery and the magic in the humble oyster; we see the omen in a creature quietly disappearing from waters that once gave life to us all.” –Will Stolzenburg, author of Where the Wild Things Were

“The Living Shore is a jewel, a small enlightening book that moves gracefully from the last gasps of the world's smallest oyster to the coastal origins of mankind. Rowan Jacobsen's engaging style makes it all possible and somehow leaves the reader both alarmed and inspired." –Jim Lynch, author of The Highest Tide