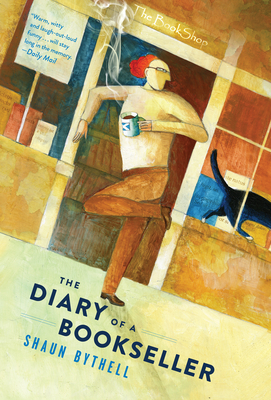 By Shaun Bythell
Email or call for price.
Backordered

Shaun Bythell's Diary of a Bookseller is exactly what the title suggests: one year's worth of daily journal entries by the proprietor of The Bookshop in Wigtown, "Scotland's National Book Town," a small village in the remote Galloway region of southwestern Scotland. Bythell is a charming if prickly guide to both bookselling in general and his curious little corner of Scotland in particular, and he pulls no punches when describing the parts of his work that drive him insane with both delight (customers, staff) and rage (Amazon, customers, staff). This by itself makes for delicious reading, but it's balanced by his reverence for the finer moments of bookselling, like the thrill of coming across a rare edition in an abandoned barn, or the privilege of poring through the personal library of the recently deceased. For anyone who has ever dreamed of opening a bookstore, especially a second-hand one, this is required reading. It will either cure you of the sickness or make it much, much worse.

The Diary of a Bookseller is Shaun Bythell's funny and fascinating memoir of a year in the life at the helm of The Bookshop, in the small village of Wigtown, Scotland—and of the delightfully odd locals, unusual staff, eccentric customers, and surreal buying trips that make up his life there as he struggles to build his business . . . and be polite . . .

When Bythell first thought of taking over the store, it seemed like a great idea: The Bookshop is Scotland's largest second-hand store, with over one hundred thousand books in a glorious old house with twisting corridors and roaring fireplaces, set in a tiny, beautiful town by the sea. It seemed like a book-lover's paradise . . .

Until Bythell did indeed buy the store.

In this wry and hilarious diary, he tells us what happened next—the trials and tribulations of being a small businessman; of learning that customers can be, um, eccentric; and of wrangling with his own staff of oddballs (such as ski-suit-wearing, dumpster-diving Nicky). And perhaps none are quirkier than the charmingly cantankerous bookseller Bythell himself turns out to be.

But then too there are the buying trips to old estates and auctions, with the thrill of discovery, as well as the satisfaction of pressing upon people the books that you love . . .

Slowly, with a mordant wit and keen eye, Bythell is seduced by the growing charm of small-town life, despite —or maybe because of—all the peculiar characters there.

Shaun Bythell is the owner of The Bookshop in Wigtown, Scotland. The Diary of a Bookseller is his first book.

”Among the most irascible and amusing bookseller memoirs I’ve every read.” —Dwight Garner, THE NEW YORK TIMES

“Warm and funny, and deserves to become one of those bestsellers that irritate [Bythell] so much.” —MAIL ON SUNDAY

“It is hysterical. Anything that anyone ever wanted to know about what a bookseller really thinks is in here.”—Caitlin Luce Baker, University Bookstore

"Outspoken, hilarious and thought-provoking... It's the best inducement I’ve ever come across to set aside my occasional flirtation with e-readers, walk into a bookstore and get my hands on the real thing." —BOOKREPORTER

"Often hilarious... The Diary of a Bookseller is a charming mix of wacky characters and caustic diatribe, an ode to that perilous trade." —THE RECORD

“For anyone who has ever dreamed of owning a bookstore. Bythell’s hilarious account will have those in the industry crying and those otherwise employed dropping their resume off at their local indie.” —SAN FRANCISCO CHRONICLE

"Makes for entertaining reading... he has a keen waggishness which makes his reflections funny and memorable and this book a hoot." —MEMPHIS FLYER


"Bythell writes with biting humor... Bythell is a man on a mission, and a year seen through his eyes convinces the reader that it is a mission worthy of undertaking." —CHICAGO TRIBUNE


"With wit and humility, Bythell, owner of a used bookshop in Wigtown, Scotland, chronicles a year in the life of a bookseller... Bythell’s narrative is lively and intelligent." —PUBLISHERS WEEKLY

"Sure to bring book lovers chuckles, nods of recognition and a surge of hope for bookshops everywhere." —SHELF AWARENESS