History of the Rain: A Novel (Paperback) 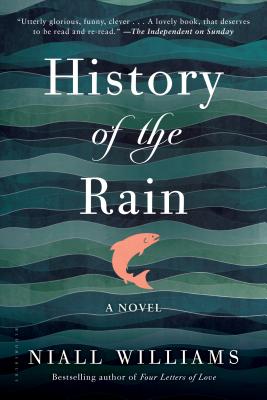 History of the Rain: A Novel (Paperback)

Longlisted for the 2014 Man Booker Prize

We are our stories. We tell them to stay alive or keep alive those who only live now in the telling. That's how it seems to me, being alive for a little while, the teller and the told.

So says Ruthie Swain. The bedridden daughter of a dead poet, home from college after a collapse (Something Amiss, the doctors say), she is trying to find her father through stories--and through generations of family history in County Clare (the Swains have the written stories, from salmon-fishing journals to poems, and the maternal MacCarrolls have the oral) and through her own writing (with its Superabundance of Style). Ruthie turns also to the books her father left behind, his library transposed to her bedroom and stacked on the floor, which she pledges to work her way through while she's still living.

In her attic room, with the rain rushing down the windows, Ruthie writes Ireland, with its weather, its rivers, its lilts, and its lows. The stories she uncovers and recounts bring back to life multiple generations buried in this soil--and they might just bring her back into the world again, too.

Niall Williams was born in Dublin in 1958. He studied English and French literature at University College Dublin before graduating with a Master's degree in Modern American Literature. He moved to New York in 1980 where he married Christine Breen, whom he had met while she was a Master's student also at UCD, and took his first job opening boxes of books in Fox and Sutherland's bookshop in Mount Kisco. He later worked as a copywriter for Avon Books in New York City before leaving America with Chris in 1985 to attempt to make a life as a writer. They moved on April 1st to the cottage in west Clare that Chris's grandfather had left eighty years before to find his life in America. His first four books were co-written with Chris and tell of their life together in Kiltumper in west Clare. In 1991 Niall's first play 'The Murphy Initiative' was staged at The Abbey Theatre in Dublin. His second play, 'A Little Like Paradise' was produced on the Peacock stage of The Abbey Theatre in 1995. His third play, 'The Way You Look Tonight,' was produced by Galway's Druid Theatre Company in 1999.

“A glorious celebration of [Ireland's] storytelling tradition . . . Sweep[s] the reader joyfully along.” —The Daily Telegraph

“History of the Rain is charming, wise and beautiful. It is a love letter to Ireland in all its contradictions, to literature and poetry and family. It acknowledges that faith itself is a paradox, both possible and necessary. And faith carries this novel--faith that stories can save us, that love endures, that acceptance is within reach, and finally, that it is possible to get to the other side of grief.” —Shelf Awareness

“A celebration of books, love and the healing power of the imagination.” —Irish Independent

“You can smell the peat burning and feel the ever-present mist in acclaimed Irish novelist Williams' luscious paean to all who lose themselves in books. Williams captures the awe and all of Ireland--its myths and mysteries, miseries and magic--through [Ruth's] pitch-perfect voice.” —Booklist

“Destined to be a classic, Williams's seventh novel isn't just the elegy Ruthie offers to the departed but also a love letter to reading and its life-giving powers. [Her] voice invites comparisons to Jim Hawkins, Ishmael, and hosts of legendary literary narrators.” —Library Journal