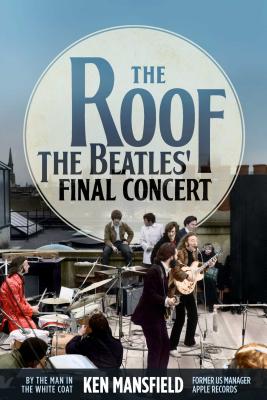 HE WAS THERE! Apple Records former US manager Ken Mansfield takes a touching and comprehensive look back on one of Rock’n’Roll’s most significant events, while bringing an insider’s perspective to the days leading up to those 42 fascinating minutes of the Beatles monumental Rooftop Concert.

There are moments in time that cause us to stop and take notice of where we were and what we were doing when they happen in order to commit the experience to memory—how it made us feel, who was there with us, why it felt important. January 30, 1969 was one of those moments.

There are those who were on the periphery of the event that day and heard what was going on; but as one of the few remaining insiders who accompanied the Beatles up onto the cold windswept roof of the Apple building, Ken Mansfield had a front row seat to the full sensory experience of the moment and witnessed what turned out to be beginning of the end. Ken shares in The Roof: The Beatles Final Concert, the sense that something special was taking place before his eyes that would live on forever in the hearts and souls of millions.

As the US manager of Apple, Ken Mansfield was on the scene in the days, weeks, and months leading up to this monumental event. He shares his insights into the factors that brought them up onto that roof and why one of the greatest bands of all time left it all on that stage. Join Ken as he reflects on the relationships he built with the Fab Four and the Apple corps and what each player meant to this symphony of music history.
Ken Mansfield has experienced a life that most people have only read about. He was in the heart and heat of the music industry when it was young and vibrant—back when creativity and passion made the music. A simple young man from the Indian reservation lands in Northern Idaho, Ken found himself propelled into the center of a Rock ‘n’ Roll whirlwind when as a Capitol Records executive the Beatles asked him to be the US Manager of their Apple Record label as well as acting as their personal liaison between the UK and the US. When the Beatles breakup seemed inevitable, he moved on to become a Vice President at MGM Records and then President of Barnaby Records a CBS label owned by Andy Williams. Wanting to fly even higher and faster, he left the corporate world to set up his own company, Hometown Productions Inc., where he produced famous artists of that era such as Waylon Jennings, Jessi Colter, Don Ho, David Cassidy, Claudine Longet, Nick Gilder, The Flying Burrito Bros. and more.

Ken is the author of six books including the top selling The Beatles, The Bible and Bodega Bay (Broadman and Holman) and The White Book (Thomas Nelson). Other titles include, Between Wyomings (Thomas Nelson), Stumbling on Open Ground (Thomas Nelson), Rock and a Heart Place (Broadstreet) and Philco (Post Hill Press). Ken now lives, loves and writes on the beautiful Florida gulf coast with his wife Connie.