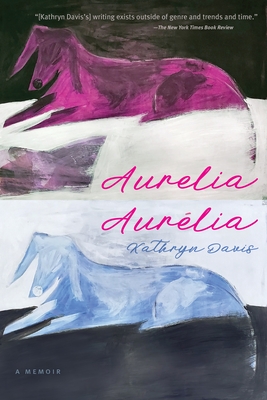 An eerily dreamlike memoir, and the first work of nonfiction by one of our most inventive novelists.

Aurelia, Aurélia begins on a boat. The author, sixteen years old, is traveling to Europe at an age when one can “try on personae like dresses.” She has the confidence of a teenager cultivating her earliest obsessions—Woolf, Durrell, Bergman—sure of her maturity, sure of the life that awaits her. Soon she finds herself in a Greece far drearier than the Greece of fantasy, “climbing up and down the steep paths every morning with the real old women, looking for kindling.”

Kathryn Davis’s hypnotic new book is a meditation on the way imagination shapes life, and how life, as it moves forward, shapes imagination. At its center is the death of her husband, Eric. The book unfolds as a study of their marriage, its deep joys and stinging frustrations; it is also a book about time, the inexorable events that determine beginnings and endings. The preoccupations that mark Davis’s fiction are recognizable here—fateful voyages, an intense sense of place, the unexpected union of the magical and the real—but the vehicle itself is utterly new.

Aurelia, Aurélia explodes the conventional bounds of memoir. It is an astonishing accomplishment.

Kathryn Davis is the author of six novels. She has received the Kafka Prize, the Morton Dauwen Zabel Award, a Guggenheim Fellowship, and the Lannan Foundation Literary Award. She teaches at Washington University, and lives in Vermont and St. Louis, Missouri.

“[Aurelia, Aurélia is] like one of those remote places populated by landrace flora and fauna that exist nowhere else on earth. . . . [Kathryn Davis] has written a memoir that mimics the atemporal quality of the episodes that give meaning to life. Aurelia, Aurélia doesn’t care for the constraints of melody, but is nonetheless an entrancing song.”—Molly Young, The New York Times

“A glimmering memoir like none you’ve ever read. . . . Davis’ novels have often featured wanderers and seekers, allegories of self-exile and scenes evicted from the tangible world. This tendency to sidestep reality has allowed her to successfully transcend the conventional let-me-tell-you style of memoir in favor of something rarer, more ethereal.”—Leslie Pariseau, Los Angeles Times

“A work of great originality. . . . Every inimitable story must leave in the mind of the reader an intangible residuum of pleasure, even unsettling pleasure, or haunting pleasure; such a story has to have joy and sadness that at times may seem the same thing; it has to have, to paraphrase an idyll of Theocritus, shades of light and darkness moving over a field. Davis’ memoir has all of the above. The virtuoso writing in Aurelia, Aurélia is a reprieve from all ghastly things.”—Howard Norman, Lit Hub

“The beauty of Aurelia, Aurélia, the beauty of all good literature, is how it allows us to be present in the past. Davis's childhood is with her still, and it's with her readers, and enchanting in a more immediate sense than the loss pressing in on her from all sides.”—James Butler-Gruett, DIAGRAM

“[An] exquisite, lightning-bolt bright, zigzagging, and striking musing on the self, life, death.”—Donna Seaman, Booklist

“In a work such as Davis’, the secret sauce is tasted during the leap between sentences and paragraphs, not in the accretion of life facts and their self-assertions. . . . For some of us, life is a cabaret or a box of chocolates or a marathon-not-a-sprint, but for Davis it’s a bardo. . . . I felt the shivers while reading Aurelia, Aurelia – and enjoyed that sensation so much that I read it again for the pleasures of its transitional moments and snappy prose.”—Ron Slate, On the Seawall

“In Aurelia, Aurélia . . . it’s the consideration of grief’s reverberations—that is, not what grief is, but what grief makes one think about—that serves to sharpen the sense of loss. The straying is the point. . . . For someone concerned with destabilization in time and space, a hallmark of Davis’ style is the directness and simplicity of her prose. . . . [ Aurelia, Aurélia] does something to you with language—in language—that is recognizable and palpable yet, like grief, resists easy order.” —Thomas Mira y Lopez, Cleveland Review of Books

“There are passages in Davis' lavishly imaginative novels that read like first-person autobiography. And there are parts of her new Aurelia, Aurélia . . . that are ingenious fabrications. . . . Davis is a maestro of atmosphere and mood. . . . [Aurelia, Aurélia] exemplifies her entanglement of the expository and the fanciful, the plain and the fantastic. . . . This isn't grief as primal scream but elegy with an uncannily light touch. The effect might even be called comic in the Shakespearean way of enfolding sorrow within enchantment. Memory opens and reopens and keeps leading back to the fact of a beloved's death; the outcome, however, isn't just loss but transformation.”—Jim Schley, Seven Days

“Bending genre and time, [Aurelia, Aurélia] is a pleasure to get lost in.”—Publishers Weekly

“Brief yet stunning. . . . An attentive reader and erudite writer, Davis plumbs her internal archive in search of solace and clarity in the face of ineffable tragedy. . . . These disparate moments transform the memoir into something that flows more like a guided dream, rendered in daring, vulnerable prose, steeped in death but brilliantly transformative. . . . A transcendent work of literary divination.”—Kirkus Reviews, starred review

“As a fan of her novels, I knew what to expect from Kathryn Davis: the beautiful prose, the depth of thought, the originality, the wit. But I was not prepared to be as moved as I was reading her intensely poignant memoir. She has a gift for writing about the most difficult subjects with honesty, precision, and grace, and though much of it is heartbreaking Aurelia, Aurélia made me rejoice.”—Sigrid Nunez

“This is simply an incomparable book. Kathryn Davis has created what feels like a parallel plane of existence where lucky strangers—readers—are allowed to briefly visit.”—Heidi Julavits

“Kathryn Davis’s Aurelia, Aurélia is a splendid memoir, a spiritually fortifying meditation on the concept of transition as it applies to literature, music, life and death. The discovery of life’s ending comes early with fairy tales and later with her beloved husband’s death. In between she discovers words and writers and music. Reading To the Lighthouse with its famous transition, Davis is transported: ‘You leave the page behind and if you’re lucky you’re granted access to the mind of the person who wrote what was on it.’ Kathryn Davis grants her readers such access, and it is exhilarating. This is visionary work that rewards reading and re-reading.”—Christine Schutt

“Kathryn Davis's novels are like no one else's. It should not have surprised me (and yet it did) that her memoir is just as singular. In the same way that a Möbius strip plays tricks with surfaces, Aurelia, Aurélia plays tricks with time. The voice it adopts is classically retrospective, yet it lays its material out with an unusual simultaneity of effect, as if Davis were capable of inhabiting every period of her life just as fully—and with the same immediacy—as she does the present. This is a beautiful, graceful, acutely intelligent memoir, sometimes sorrowful, sometimes quietly funny, but always wide awake to the strange wonder of being.”—Kevin Brockmeier