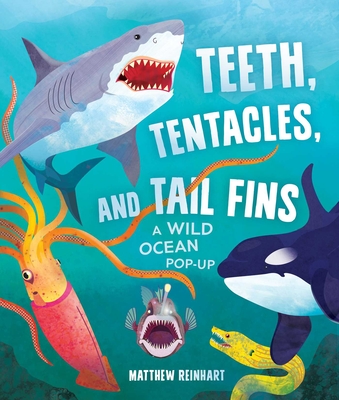 By Matthew Reinhart, Susan B. Katz (Contributions by)


On Our Shelves Now
Get up close and personal with fierce and fascinating ocean predators in this pop-up book by renowned paper engineer and author Matthew Reinhart!

Just when you thought it was safe to go in the water…pop-up master Matthew Reinhart reveals the underwater world where creatures such as the colossal squid, the anglerfish, and the goblin shark lie in wait. Full of captivating images, breathtaking pop-ups, and jaw-dropping facts about animals’ behavior and anatomy, this incredible pop-up book will astonish and amaze anyone who dares to journey to the depths of the savage sea.

50+ FASCINATING CREATURES: See and learn about the denizens of the sea from the colossal squid to the anglerfish to the goblin shark.

LEARN BY DOING: Amazing flaps, pull tabs, and other interactive features reveal even more secrets of the ocean!

FOR EXPLORERS OF ALL AGES: Kids and adults alike can dive deep into the world of the ocean’s predators!

MASTER PAPER ENGINEER: Created by Matthew Reinhart, one of the most honored and bestselling pop-up book paper engineers in the world!
Matthew Reinhart studied industrial design at the Pratt Institute in Brooklyn, New York, before finding his calling as a paper engineer. His books include the best-selling Star Wars: A Pop-Up Guide to the Galaxy, Game of Thrones: A Pop-Up Guide to Westeros, and DC Super Heroes: The Ultimate Pop-Up Book, among many other award-winning titles. He lives in San Francisco.