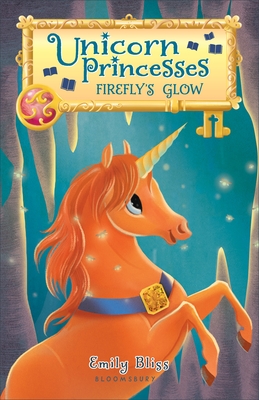 This is book number 7 in the Unicorn Princesses series.

Welcome to an enchanted land ruled by unicorn princesses!
Cressida Jenkins, a unicorn-obsessed girl who is sure that unicorns are real, is invited to visit, and readers will be thrilled to journey to the Rainbow Realm along with her! In each story, Cressida is called to help a unicorn princess and her sisters in a magical adventure.

Journey to the Shimmer Caves on an adventure with Princess Firefly, the orange unicorn who can create beautiful swirls of fireflies with her magic amber gemstone. Firefly loves reading more than anything else! She's spent months creating the best library for all the creatures in the Rainbow Realm, but Ernest the blundering wizard lizard casts a spell that might ruin the grand opening. Will Cressida be able to find a way to save all of Firefly's hard work?

This magical series is full of sparkle, fun, and friendship.

Emily Bliss lives just down the street from a forest. From her living room window, she can see a big oak tree with a magic keyhole. Like Cressida Jenkins, she knows that unicorns are real.

Sydney Hanson was raised in Minnesota alongside numerous pets and brothers. In addition to her traditional illustrations, Sydney is an experienced 2D and 3D production artist and has worked for several animation shops, including Nickelodeon and Disney Interactive. In her spare time she enjoys traveling and spending time outside with her adopted brother, a Labrador retriever named Cash. She is the illustrator of the Unicorn Princesses series and the picture book, Next to You. Sydney lives in Los Angeles.
“Detailed, visually descriptive language . . . Appealing black-and-white computer-generated interior illustrations complement the text.” —School Library Journal