Ogadinma: Or, Everything Will Be All Right (Paperback) 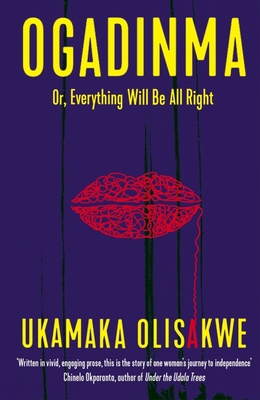 Ogadinma: Or, Everything Will Be All Right (Paperback)


Will Ship in 3-6 Days from our Distributor

Who do you turn to for help when your own family is responsible for the abuse and trauma perpetuated against you? This story is powerful, sad, and ultimately hopeful as Ogadinma navigates a journey to selfhood and healing after a lifetime of subservience and abuse in a misogynistic and patriarchal culture. I couldn’t put this book down even through all the horrors she endured. And dear reader, there are many, more than any woman should bear. Please read this book so that these stories can educate and change the culture of abuse toward women. Also the descriptions of food are mouth-watering! Delicious writing. I will be thinking about Ogadinma for a long time and I am grateful this author wrote her story, and grateful too for the publisher who published it.

— Sam
Ogadinma Or, Everything Will be All Right is a tale of departure, loss and adaptation; of mothers whose experience at the hands of controlling men leave them with burdens they find too much to bear. After an unwanted pregnancy leaves her exiled from her family in Kano, thwarting her plans to go to university, seventeen-year-old Ogadinma is sent to her aunt's in Lagos. When a whirlwind romance with an older man descends into indignity, she is forced to channel her strength and resourcefulness to escape a fate that appears all but inevitable. A feminist classic in the making, Ukamaka Olisakwe’s sophomore novel introduces a heroine for whom it is impossible not to root and announces the author as a gifted chronicler of the patriarchal experience.
Ukamaka Olisakwe is a Nigerian novelist, short story writer and screenwriter. In 2014 she was chosen as one of Sub-Saharan Africa’s most promising writers under the age of 40. She was born in Kano, Nigeria, and in 2016, was a resident at the University of Iowa’s International Writing Program. Her writing has appeared in Catapult, the New York Times and The Rumpus. She wrote the screenplay for The Calabash, a Nigerian television series that premiered in 2015 on Africa Magic Showcase.
"Olisakwe’s affecting novel begins with a gut punch and ends in an epiphany. Written in vivid, engaging prose, this is the story of one woman’s journey to independence." --Chinelo Okparanta, author, Under the Udala Trees

"Ukamaka Olisakwe has written an unflinching portrait of survival and strength. The story of Ogadinma’s indomitable character and her harrowing journey is deeply moving. Olisakwe has proven to be a fearless writer, and I am grateful for this powerful work." --Julianna Baggott, author, The Seventh Book of Wonders

"The writing in this novel is crisp, the pace is measured, and the prose is beautiful." --The Lagos Review

"An intimate and dazzling exploration of the life and times of a young Nigerian woman whose move to the capital city of Lagos leads to a series of encounters, which are by turns disorienting, revelatory and tragic." --Christopher Merrill, author, Self-Portrait with Dogwood