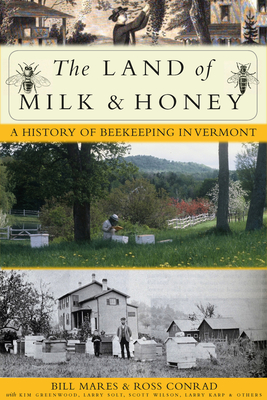 
Email or call for price
Land of Milk and Honey: A History of Vermont Beekeeping follows the trials and tribulations of beekeepers in Vermont. This dramatic history begins in the early 1800’s following the life and times of inspired beekeepers that are the advance guard of a line of notable beekeepers that is to stretch through the centuries into modern times. Readers will discover a beekeeping lineage born and raised within a single Vermont county, and establishes a continuity of beekeeping knowledge and skill spanning more than a century. The lineage of beekeeping concludes in the present day as apiculturists throughout the world face some of the most challenging times in over 200 years with the possibility of honey bee extinction rearing its ugly head. Is it possible that by reflecting on the history of Vermont’s beekeepers we can find clues about what is needed to help the honey bee thrive today and well into the future? Land of Milk and Honey will also explore the relationship between the people of Vermont and the countryside they inhabit: a land and people that shift and change through the centuries in ways that directly impact the health and well-being of bees and its beekeepers.

Ross Conrad of Middlebury learned his craft from the late Charles Mraz and his son Bill. Conrad is a former president of the Vermont Beekeeper's Association, a regular contributor to Bee Culture Magazine, and author of Natural Beekeeping: Organic Approaches To Modern Apiculture published by Chelsea Green. He has given bee related presentations and led organic beekeeping workshops and classes throughout North America for many years. His human-scale beekeeping business, Dancing Bee Gardens, supplies friends and neighbors with honey and other bee related products, 5-frame nucleus bee colonies in the spring, and rental hives for local pollination.

Bill Mares has been a backyard beekeeper for over 45 years. Raised in Texas, educated at Harvard, Mares is a former journalist, state representative and high school teacher. Mares has authored or co-authored 17 books on a range of topics, including "Bees Besieged." He been president of the Vermont Beekeepers Association and the Eastern Apicultural Association. He received the Devillbiss Award for from EAS in 2012 and was named Vermont Beekeeper of the Year in 2013. He lives in Burlington, Vermont, with his wife of 48 years, Chris Hadsel.